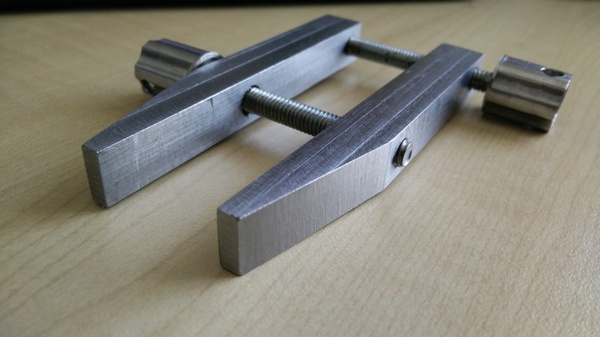 Toolmaker's Clamp
Tue 14 June 2022
I have managed to make the toolmaker's clamp that I mentioned last time. It is made out of mild steel, which is soft for a machinist's tool, but harder than wood, plastic, and aluminium, which are what I'm normally limited to. Since I made it, it belongs to me, and a clamp is a type of tool, I suppose this is both a toolmaker's clamp and a clampmaker's tool. Read more 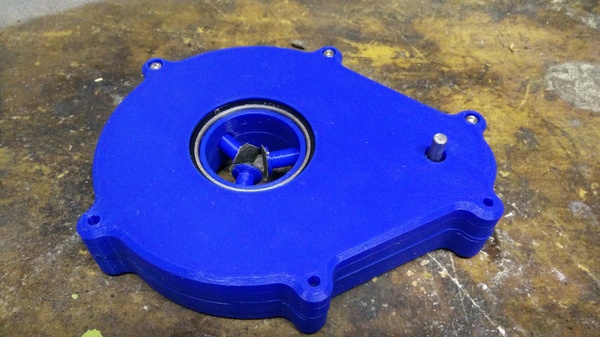 A method and apparatus for polishing shafts
Sat 1 May 2021
I have invented a new tool. From time to time, I expect you, like me, need to sand down the outside of a piece of round bar. I expect you, like me, chuck the round bar in a drill or a lathe, spin it up, and then hold sandpaper against it to sand it. This works fine when you are able to spin the round bar, but sometimes the bar is already connected to something big or inconvenient and you are not able to spin it, and you are left wondering what to do. Read more

I want to cast some rings
Thu 21 January 2021
Emma and I are getting married later this year, which means we need to acquire some wedding rings. I initially wanted to get rings made of some exotic alloy like Inconel, but now I think I'd like to cast them myself out of gold, which means I need to learn how to cast rings. If you know how to cast rings, perhaps you can help me learn. Read more

My DIY Cryptosteel Capsule
Mon 20 January 2020
Bitcoin wallets give you a mnemonic seed to write down and keep safe. This is usually 12 to 24 words from the BIP39 word list. But if you write it on paper, it is easily damaged by flood or fire. An improvement is "Cryptosteel"-type devices, which allow you to record the mnemonic seed in metal, such that it is recoverable in the event of flood or fire. I built one myself. Read more

We entered the BLMRA 12 hour lawnmower race again
Sat 11 August 2018
After last year's poor show at the 12 hour, we did some much-needed work on the mower and had another go. Read more

I made a plymetal heart decoration
Sun 26 April 2015
This evening I had an idea for making an effect like plywood, but out of metals (hence "plymetal"). I tried it out to make a little heart decoration and it worked great, although I did a poor job. Read more