I want to cast some rings

Emma and I are getting married later this year, which means we need to acquire some wedding rings. I initially wanted to get rings made of some exotic alloy like Inconel, but now I think I'd like to cast them myself out of gold, which means I need to learn how to cast rings. If you know how to cast rings, perhaps you can help me learn.

I plan to start with aluminium. Only once I have convinced myself that I can produce acceptable rings with aluminium do I plan to shell out for gold. If I can't get it to work with aluminium, we'll just buy some rings that someone else has made. So I feel that there's relatively little risk in pursuing this for now. There is a risk that I can do it with aluminium but not with gold, but that's a bridge that I'll cross if I get to it.

The plan for casting the rings is:

This process is functionally equivalent to the traditional lost wax casting process, except using PLA instead of hand-carved wax, leading to the name "lost PLA casting".

It sounds easy, and indeed has been described as "super easy", but so far I've had 3 attempts and produced 0 rings.

In addition to the rings, I also 3d-printed a little (negative of) a pouring basin/funnel and sprue, to give me half a chance of getting the metal into the mould: 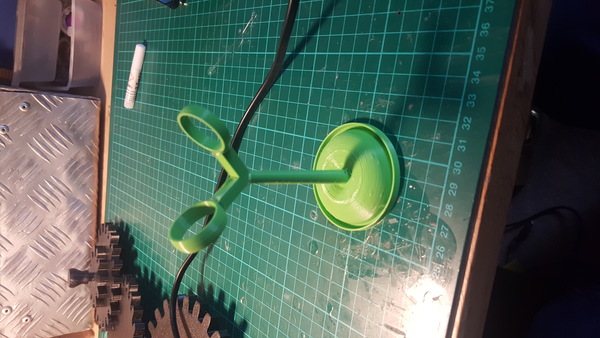 The pieces there are stuck together with hot glue, which I expect will burn out just as well as PLA does. That is upside down relative to how the metal will be poured.

My first attempt used some of the plaster left over from my attempts at sintering 3d-printed bronze PLA. This was over a year ago and I guess the plaster has gone off, because it did not set hard. I burnt out the plastic anyway, but I was left with a crumbly block of plaster that broke apart as I tried to handle it.

I did not even try to pour metal into this mould.

Not to be defeated, I bought a new bag of plaster from eBay. I seem to recall that the first bag I bought was sold as "fine casting plaster", but this time I didn't find any suitable-looking results for that search so I ended up buying "Plaster of Paris", which seems equivalent.

I stuffed up my first attempt at using this plaster by trying to add water to the plaster instead of the other way around. This resulted in thick clumps of plaster that I couldn't mix into the water. But I'm not counting that as a discrete attempt.

I chucked away the wet clumpy mix and instead followed the instructions on the bag, adding 150g of powder to 200ml of water. This worked much better. I let the plaster dry for a few hours, and then started the burnout cycle.

I found this burnout process from Pinterest in a DuckDuckGo image search: 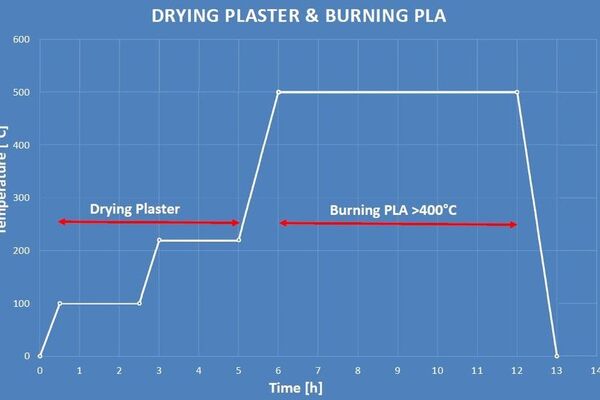 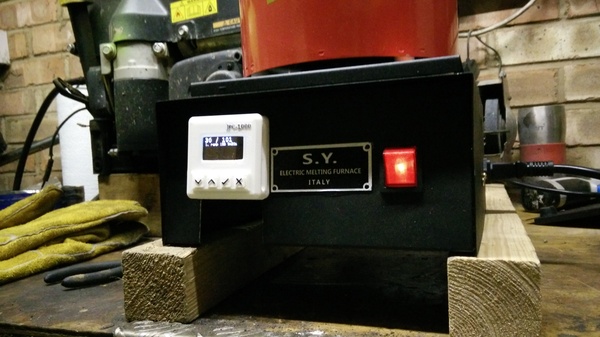 (This is an old picture of the JPC-1000 for illustration. It still looks the same, but I've put the feet back on now so I don't need to stand the furnace on wooden blocks.)

The next morning, I took the mould out of the furnace and everything seemed to have worked as expected: the plastic was gone, but the plaster was still hard. Great success!

This is what the mould looked like before I poured the metal into it: 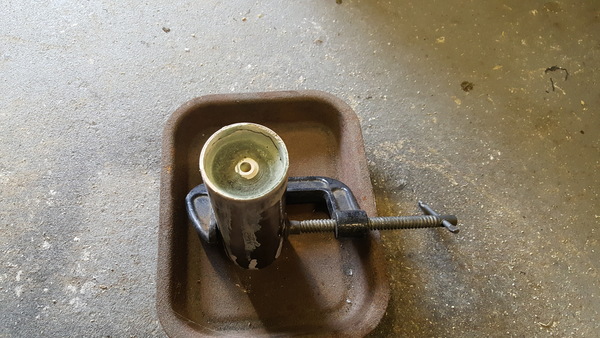 The clamp is there to make it less likely to fall over and soak my trainers with aluminium, which I am keen to avoid, and the baking tray is there to contain any spillages, for the same reason.

I set the furnace to 700°C and chucked in a bunch of aluminium. The aluminium is offcuts of thin sheets that Emma is using to make spinner necklaces. It is sold as "1050" grade, which I think is roughly elemental aluminium. According to Wikipedia, it is "not used in castings", lol. (I did not know this before, I just found out now).

I don't know how long you should leave the metal hot before pouring, so I just checked on the furnace periodically until the metal looked good and molten, and then poured it into the mould pretty unceremoniously. It bubbled a bit for a few seconds as it was sitting in the mould, I assume this is air coming out (perhaps I should have added a 2nd route for air to escape?).

After it had cooled for a decent while, I broke the mould apart and retrieved this: 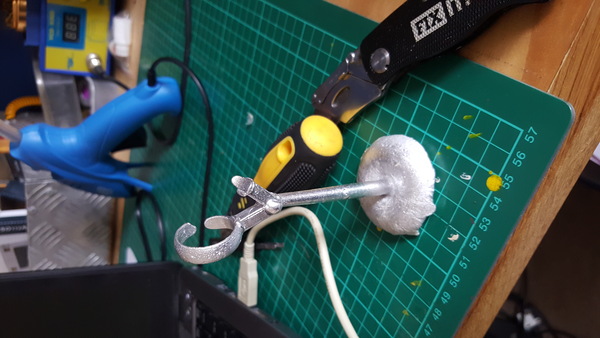 It's not exactly what I was after, but it's pretty encouraging. I think there are only 2 major problems here:

This time I added a solid part to the middle of each ring, in the hopes that it would allow metal to fill the ring faster and stop it from freezing at the entry, and that it would also provide more material to draw in as the metal cools. 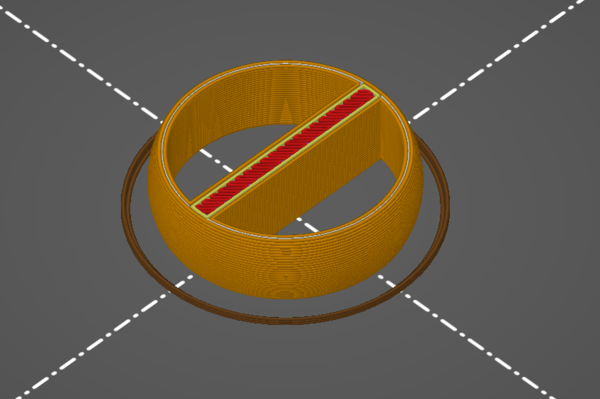 I think my problem this time was that I didn't let the metal get hot enough. I again waited until it looked decently molten, but I think I need to make this more repeatable instead of just guessing. It seemed a bit less runny as it was pouring, and after it cooled down I discovered that it had not worked very well at all: 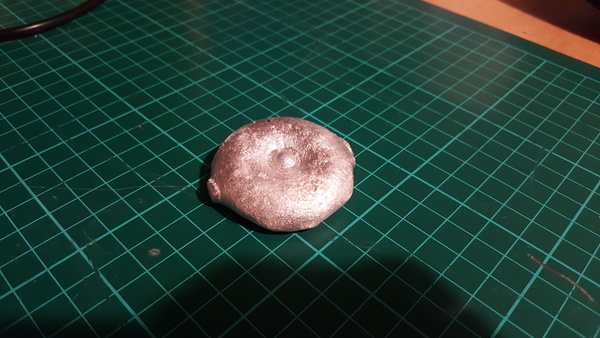 It looks like it froze almost immediately on contact with the mould, and did not allow any metal to flow into the mould.

So for next time I think I want to give the metal more time in the furnace to make sure it's properly up to temperature. If you can offer any better ideas, please get in touch. I definitely need it.

Professional jewellers sometimes cast into a machine that applies a vacuum to the bottom of the mould. The plaster is apparently slightly porous, and the vacuum helps to suck the metal into the mould. Here's a typical example from eBay:

This is quite expensive, but I think I could build one quite cheaply. Here's a diagram from VegOilGuy's video about lost PLA casting: 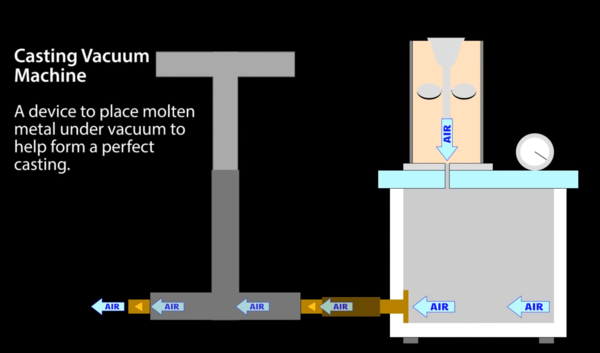 This design uses a hand pump to suck the air out of a chamber underneath the mould, but I don't think that sounds appealing. I think an electric pump is a better idea.

Another approach used in professional casting is to cast in a centrifuge so that the centrifugal force (fight me) pushes the metal into the bottom of the mould. Here's a screen capture from a demonstration video: 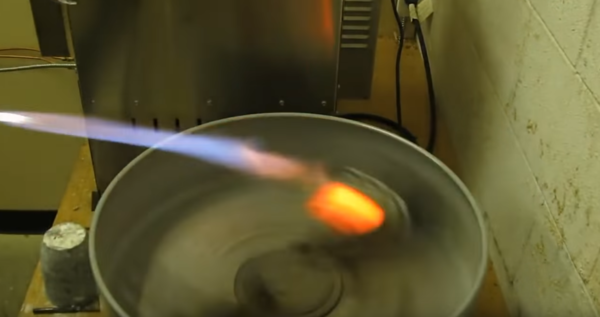 These are also quite expensive, but I also think I could build one quite cheaply, although centrifugal casting has the downside that if something goes wrong then it is liable to spray molten metal everywhere, which seems like it could be potentially hazardous. But I think it should produce much more force than a vacuum, so is probably superior.

The way to test it would be to have it fling water into the bottom of the mould quite a few times: if you get wet, the machine is not ready for molten metal.

I think it would be better to have an electronically-controlled furnace for the burnout (like I have now), and also a separate furnace for melting the metal. That way the mould can stay in the furnace right up until the time that the metal is poured, which would allow the mould to stay hot, and therefore make it less prone to prematurely freezing the metal. I might be able to get some of this effect by just keeping the mould in the oven at 200°C until I'm ready to use it.

So far I am pouring significantly more metal than goes into the rings. I sense that this will not be viable if I am working with actual gold, as gold is expensive. If I need to buy 5x as much gold as the amount of gold in the rings, then I can't afford to do it, so I definitely need to work on reducing the excess metal. But making rings at all is a more fundamental problem, so I'm starting with that one. The problem with reducing the amount of metal is that it reduces the hydrostatic pressure at the bottom of the mould, which means it won't reproduce the detail of the mould as well.

Hydrostatic pressure wouldn't be a problem if casting in a centrifuge, so maybe a centrifuge is the way to go.

I would like to melt a bit of sentimentally-significant metal into the gold that we make our rings from. I'm aware that this would destroy the financial value of the gold, but I still think it would be nice.

Most of the obvious candidate objects that I can think of are made of either steel (which I can't usefully melt), or aluminium. Unfortunately, from what I've read, aluminium and gold do not alloy together, they instead form a gold-aluminium intermetallic. What I want to know is if there is a low concentration of aluminium at which they do alloy together.

I found this picture of "Aluminium aurate" from a place that sells it on purpose: 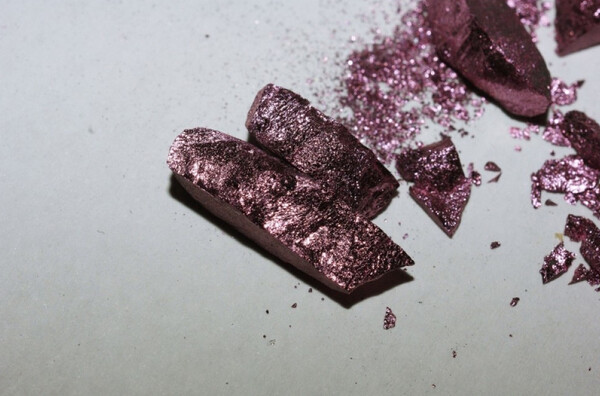 And while it does look cool in its own way, powdery purple glitter is very much not the effect I'm after. But this is 21.5% aluminium. Maybe if it was only 1% aluminium it would be fine?

Keeping the mould in the flask

The flask is made of stainless steel and expands in the furnace more than the plaster does. This means the plaster separates from the flask during the burnout, and half the time when I try to take the mould out of the furnace the flask comes out and the mould stays inside. Perhaps I should try to punch some indentations into it so that it keeps hold of the mould?