After last year's poor show at the 12 hour, we did some much-needed work on the mower and had another go.

The showstopper last year was that the steering kept collapsing. So this year's big project was to build a new steering system from the ground up. None of the original steering components are retained.

The steering wheel is connected to a shaft which, via a series of universal joints, exits horizontally, pointing straight forwards, on the underside of the mower. 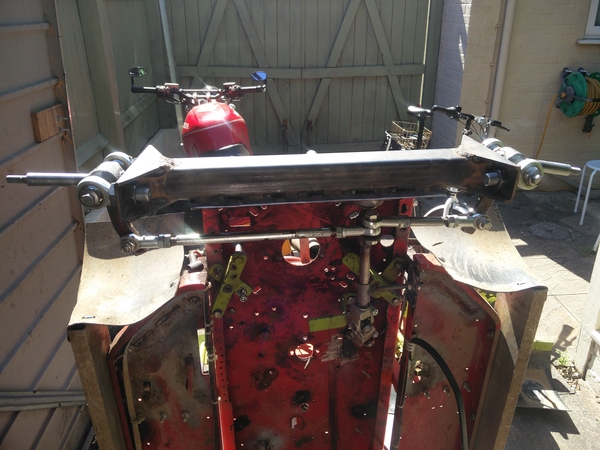 (the mower is standing on end here; the stumps at left and right are spindles for the front wheels) 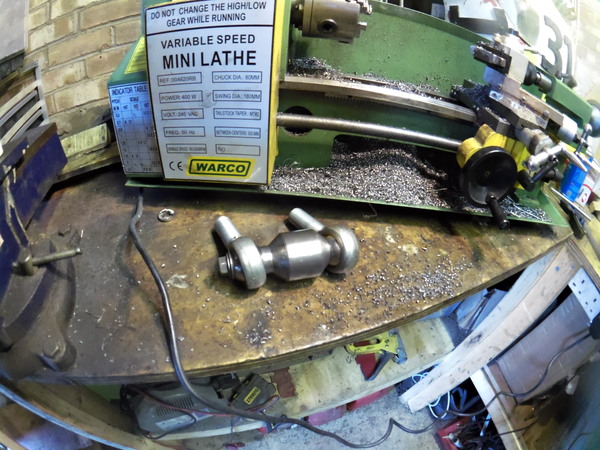 Having turned up some kingpins, this then involved drilling an off-axis hole through the centre of the kingpin, which the spindle gets welded into. I made a small jig to hold the kingpin off-axis in the lathe, and then used a holesaw to bore the hole. (The reason the spindle is welded in off-axis is so that the steering axis is inclined, which causes the steering to tend to self-centre when coming out of a turn, and reduces the scrub radius, making the steering lighter. In reality I suspect it would handle largely the same even if it was at 90 degrees, but it's the thought that counts.) 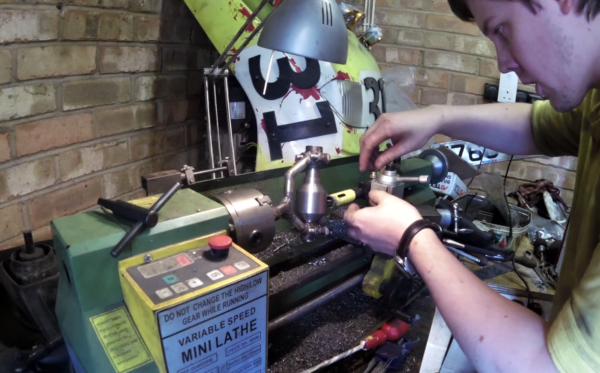 The kingpin bearings are a pair of M20 rose joints on each side, which are bolted to the large crossmember which is welded to the chassis, and finally the wheels are fitted to the spindles. 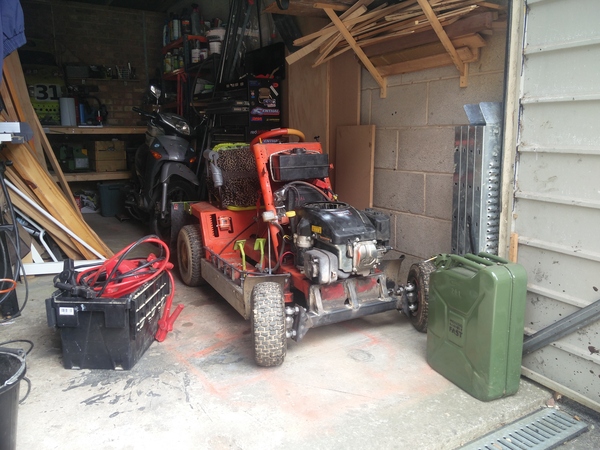 The steering system on the mower is the biggest mechanical engineering project I've ever done, and I'm pleased with the end result, although despite my best efforts the geometry is best described as "anti-Ackermann" rather than the "true Ackermann" that I was aiming for (i.e. the outside tyre actually scribes a tighter circle than the inside tyre does!).

Some racing cars use reverse Ackermann geometry to compensate for the large difference in slip angle between the inner and outer front tyres while cornering at high speed. The use of such geometry helps reduce tyre temperatures during high-speed cornering but compromises performance in low-speed manoeuvres.

So at least our tyres won't be over-heating... 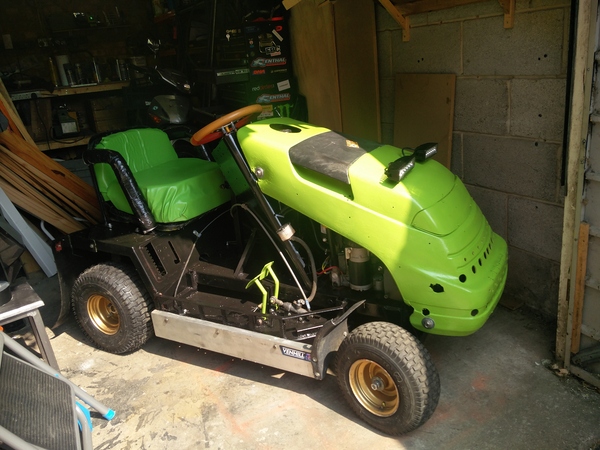 We arrived at the circuit on the Friday, the day before the start of the race, set up our pit, and waited for everything to kick off. 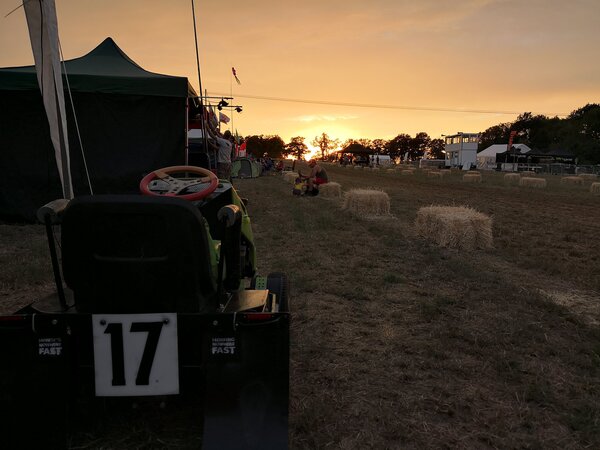 We had Emma helping out in the pits this year, bringing the total team to Feroz, James, and me driving, with Matt, Emma, and my Dad working in the pits (which is timing, refuelling, and, most importantly, repairing).

Scrutineering was at 10am which we once again passed with only minor changes required to the mower.

We had to reverse some screws which according to the scrutineer "would rip someone's flesh out", and we had to move the transponder as the timing gear wasn't picking it up very well, then it was just a short wait before practice. 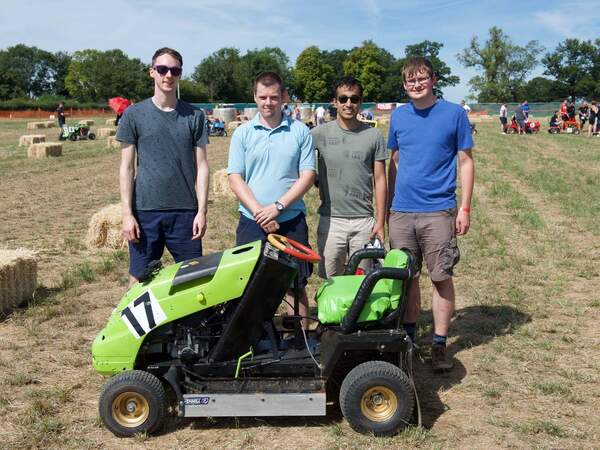 We'd lowered the gear ratio since last year, as we'd found it way too high for last year's rough conditions. However, this year's field was comparatively smooth, and we quickly learnt in the practice session that we were over-revving the engine before reaching even halfway down the straights. So the decision was made to up the gearing. The gearing is changed by changing the front pulley on the belt drive, but due to the way the belt is prevented from falling off our mower, changing the pulley is not a quick operation. So we cut our practice session short and set about changing the pulley. 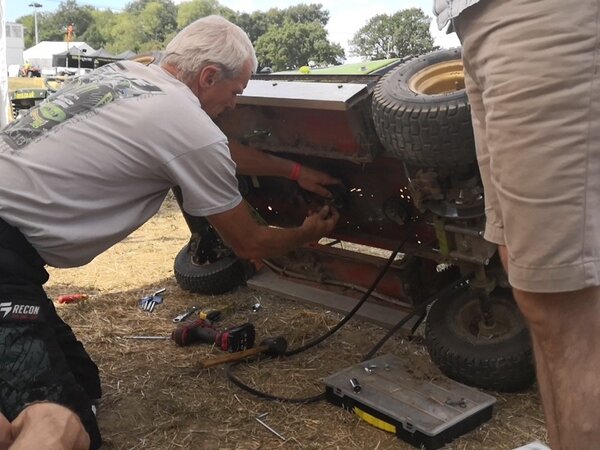 It was eventually ready to go again shortly after the qualifying session started, so while we did miss out on some practice time, we still had plenty of time to put in some qualifying laps. We eventually qualified in 26th place, of 43, which is 1 place better than last year.

We then had a few hours to rest before the start of the race. During this time the organisers put a lot of water down on the track. This is ostensibly to keep the dust down, but Feroz theorises that it is also designed to cause a lot of crashes to give the spectators a bit more of a spectacle. 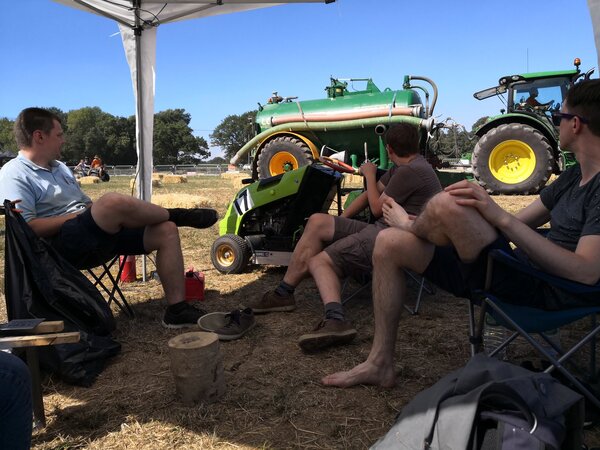 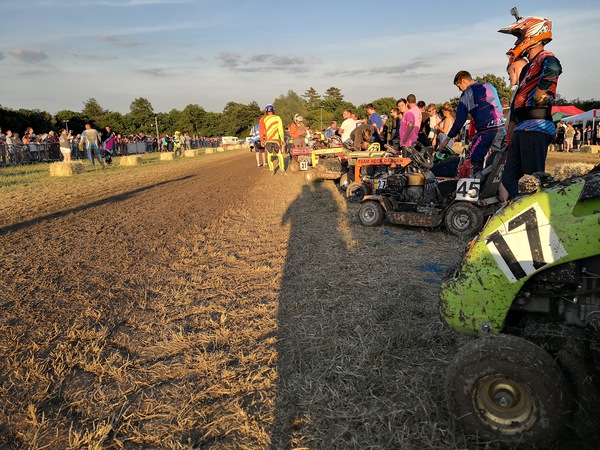 The race was a Le Mans-style start again, in which racers line up opposite their mowers, and then when the flag drops they run to their mower, start it up, and set off. This year we again got a very good start, and I was running about 11th on the first lap.

Our anti-Ackermann steering geometry works very well when cornering hard in dry conditions, because the inside tyre doesn't touch the ground anyway, as this picture from our last test session shows: 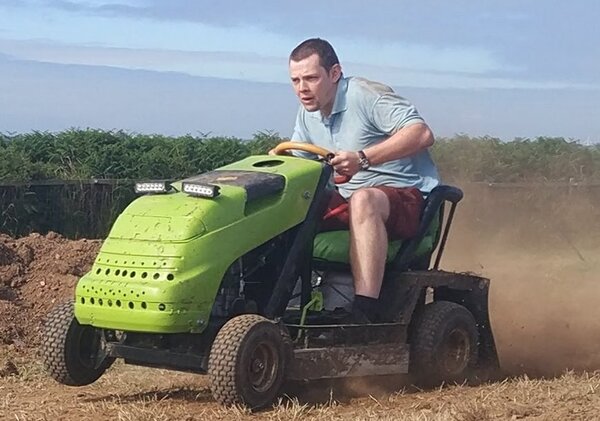 However it is not quite as good in wet conditions, like the opening laps of the race, because it is not possible to load up the outside tyre before it starts sliding. Here's a video of me entering the hairpin too fast and under-steering straight into the barrier.

There were (predictably) a lot of mowers spinning out, crashing, and otherwise losing control at the start of the race. I avoided most of the accidents that happened in front of me, but on about the third lap I spun out on the turn before the pit straight. I looped around and was ready to rejoin the circuit when the engine cut out. I tried to re-start it but it was obvious that the clutch was not disengaging, and it turned out that the clutch cable had come off. This was not a good sign. We hadn't even run for 10 minutes before we were pushing the mower back to the pit.

A few minutes later, with a new clutch cable fitted, I rejoined the circuit as the sun was starting to set: 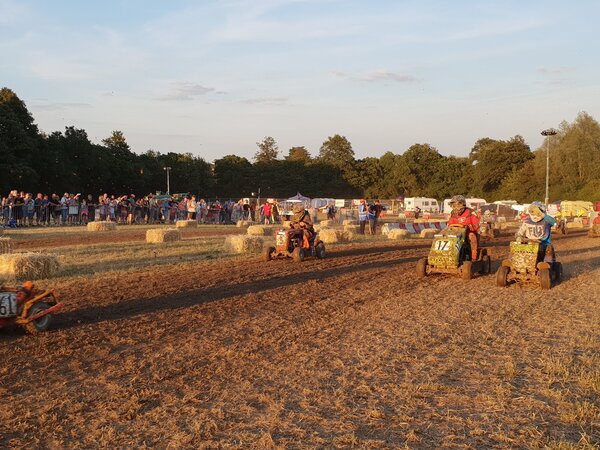 (note the lengths of the shadows, and the driver shielding his eyes with his hand)

We had no issues for about the next 6 hours, which was better than any of us could have expected.

Things were going well in my third hour-long stint, until one lap I clattered around the hairpin a bit too hard, bouncing on 2 wheels, and shortly after that the rear left tyre went flat. I pitted and we changed the tyre. 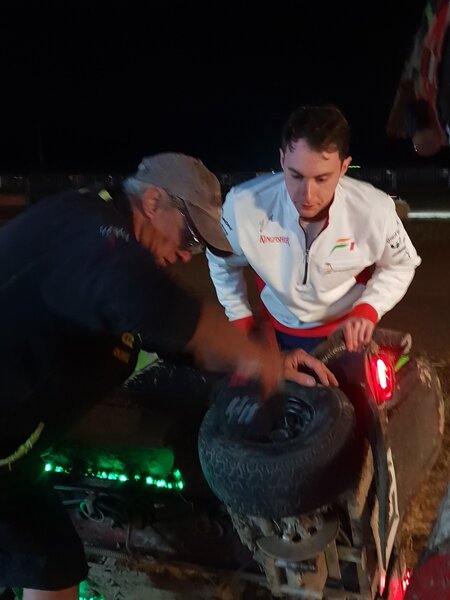 Then a couple of laps later the front left tyre went flat. Pitted and changed it, and then the belt flipped around and got a bit damaged. Pitted and put a new belt on, and now it was James's turn to drive. I had fitted the belt retention rollers incorrectly and the new belt got damaged and came off quite quickly. Another new belt on, with the rollers fitted correctly this time, and the other new belt came off quite quickly as well. This was our darkest hour. Everything seemed to be going wrong at once and I didn't think we'd be able to keep it all working for another 6 hours. 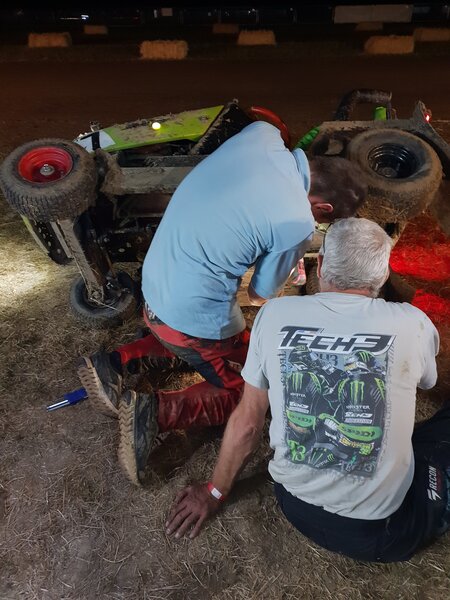 My Dad observed that the clutch mechanism was bent and the pulleys on it were misaligned, so he straightened it out, we put the belt back on, and sent James back out again. He completed his first lap and all seemed well, then two laps, then three, then four, and we began to relax once more. Everything was going well again.

And, amazingly, that was all! We had no further issues. I deliberately drove a bit more conservatively during my final stint, to avoid creating problems. I was eventually pleased to find myself driving directly into the sun once more, in the opposite direction this time, as the sun started to rise around 5.30am.

At 7am on Sunday morning we sent Feroz out for the final stint of the race, and at 8am he completed our final lap. We finished in 20th place, having completed 299 laps, or 227 miles. 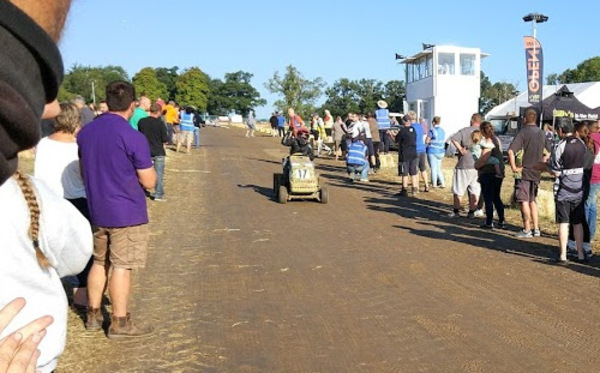 20th place is a fantastic result. Much better than we should have been, judging by the lap times of the teams immediately surrounding us. The only reason we did so well is because we had relatively few issues and were able to stay on the track, putting laps in, almost continuously for the entire 12 hours. Reliability is the name of the game.

I'm feeling much more enthusiastic about next year than I was this time last year. In order to improve in position we'll need to be putting in faster laps, which probably means reducing weight, improving the steering geometry, further lowering the centre of gravity, and gaining confidence that it won't start falling apart as we start pushing harder.

We also need to make the clutch more robust so that it doesn't bend, and get better wheels so that the tyres don't keep going flat when bouncing around corners on 2 wheels.

Here's an image showing how much force "Les's Lux Pussies" (the race winners) are able to put on their tyres without causing punctures (note the deformation of the outside front tyre): 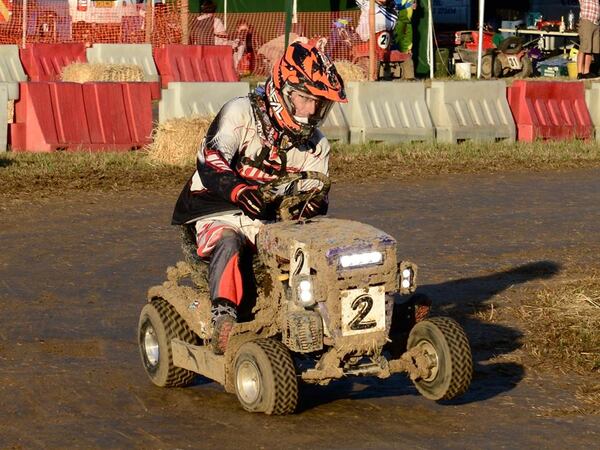 And finally, my Dad has been sizing up his own mower for a potential group 2 entry: 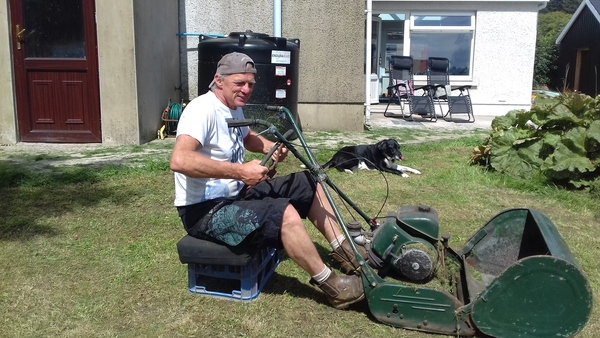