I tried to do the BLMRA 12 hour lawnmower race

Earlier this year I bought a ride-on lawnmower to go lawnmower racing. I talked Feroz Salam and James Nicholls into driving it with me, and Matt Game and my Dad into helping in the pits, and we entered the BLMRA 12 hour endurance race. 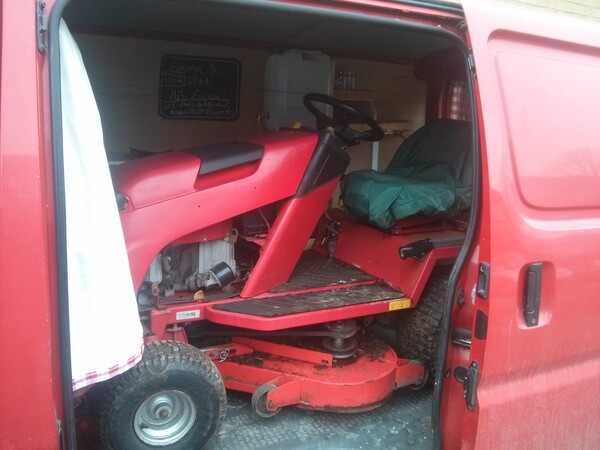 We modified the mower for racing over the course of a few months (removed blades, new engine, lights, number plates, padded seat, lowered centre of gravity, and of course a snazzy paintjob), although it turned out we hadn't done as much as most of the teams did. Most notably, we left the original lawnmower steering unchanged. Mainly due to laziness, but also because we hadn't had any problems with it during testing.

Anyway we showed up at the circuit, and our pit was right next to Deadbull Racing who have this beautiful machine: 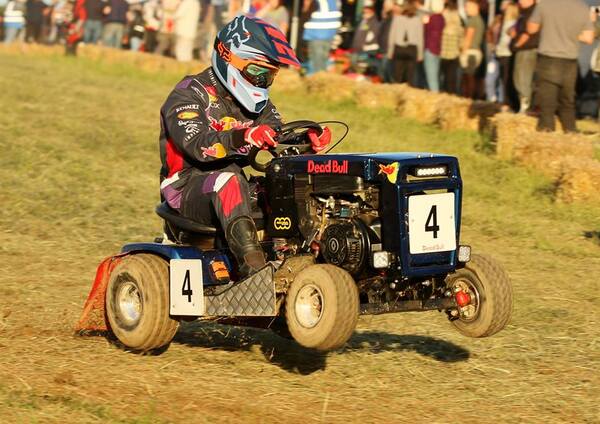 They also had quite an impressive pit. Their setup was quite intimidating compared to ours, although they were very friendly towards us. We also met Les Pantry, one of the officials, shortly after we showed up. I told him I was concerned about scrutineering but he seemed to think it would be fine.

Unbelievably, Les was right, and we passed scrutineering on the first try. The scrutineer complained that the track rod was bent, and that there were sharp edges on the side impact plates. He passed us anyway but asked us to file the sharp edges down. 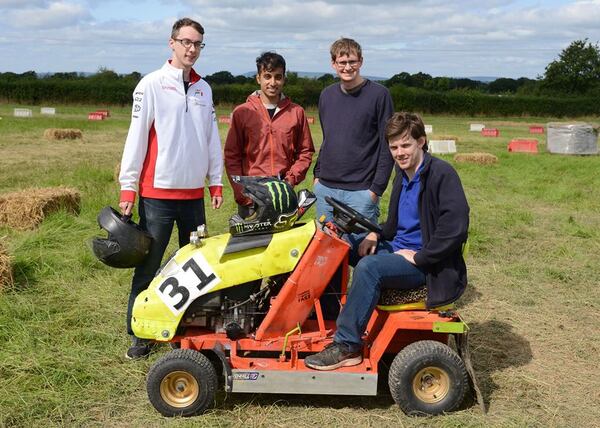 The practice session went well. It was our first time driving the mower alongside other mowers, and everything seemed nice and safe.

I twisted my ankle in qualifying when my left foot fell off the side, but my stint went OK apart from that. The qualifying session lasted 15 minutes longer than expected and Feroz ended up doing a double stint, which culminated in the clutch breaking off and shredding the belt just after he crossed the chequered flag. (It was lucky he did a double stint else it would have broken 15 minutes into the race). 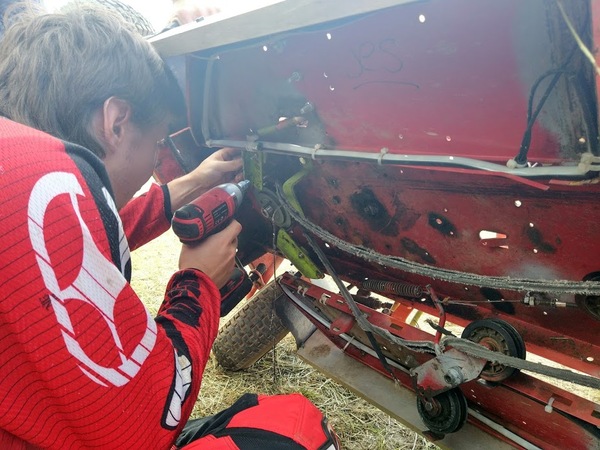 Fortunately we had enough spare parts to repair this, and after a bit of grinding and welding, we had the mower ready again with several hours to spare before the race.

On to the start grid. We qualified 27th (of 50! Not bad for a bunch of clowns on the worst mower in the field). When trying to find our spot on the grid we had another run in with Les: "no, no, no, turn around, you guys will be much further back than this", he said, as we were pushing the mower up towards 27th position. Les underestimated us.

The start was intense. It was a Le Mans-style start, where the drivers line up opposite the mowers and then when the flag drops, everybody runs to their mower, starts it up, and sets off. I ended up 15th into the first corner! This was where our race peaked. The steering was getting increasingly vague throughout my first stint, and the rack-and-pinion would occasionally skip some teeth. This is incredibly scary: your hands stay in the same place, but all of a sudden you're veering off the track. You have to quickly realise what's happened and steer back to correct it. Towards the end of my first stint the steering came disconnected completely and I couldn't carry on driving it.

We pushed the mower back to the pit and found that the bolts holding the steering rack on had shaken loose. A minute later, we'd nipped them up, turned the wheel back and forth a couple of times to make sure it was Nice and Safe, and sent James out for his first stint.

Over the course of the next couple of hours the ball-and-socket joint at the bottom of the steering column came loose and the steering column would pull itself out of the socket, which would mean the steering became completely disconnected until the driver pushed it back in. This resulted in Feroz rolling the mower and injuring his knee. (If you've never rolled a lawnmower before, imagine rolling a car that has no seatbelt and no roof; it's quite unpleasant). 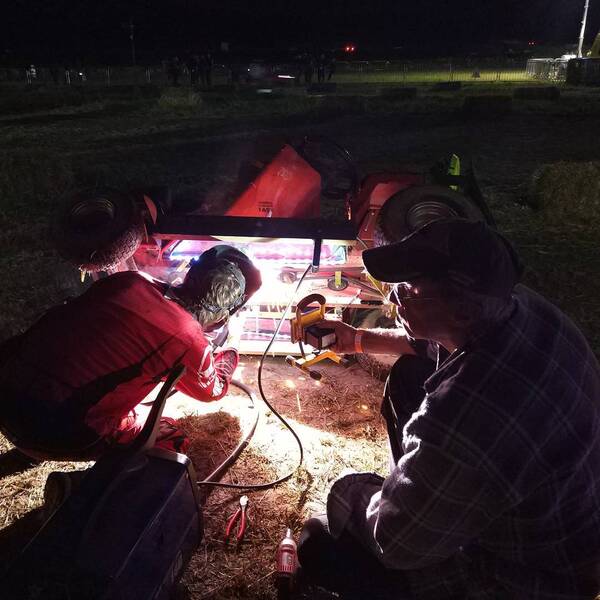 We pushed it back to the pit and welded the ball into the socket so that it couldn't come out (the actual steering pivot is inside the ball, so the steering could still steer). This was a good repair. The steering now felt rock solid and we were starting to build up some confidence. James and I got in a couple more stints with no major issues.

In my final stint I was getting some speed up and getting confident bouncing over the bumps. I was overtaking a fair amount of people. In my quest for ever-faster lines, I accidentally clipped the bales on the inside of corners, a couple of times. Both times the (small) impact was accompanied with a loud CLAAAANGGGG noise from the front end. It still drove OK so I didn't worry about it. Until all of a sudden, as I was bombing along the pit straight at about 30mph, the mower lurched to the right, just like it had done earlier on when the steering jumped some teeth. I tried to steer left, but it made no difference. The mower smashed into a hay bale and I was thrown off it, landing a few metres away on the next hay bale. The track rod had broken (although not in the place that the scrutineer was concerned about), so the front wheels now pointed in random directions.

I couldn't push it on my own because the front wheels were pointing at random, and the pit crew were apparently not paying any attention and were not coming to assist, so I abandoned the mower and walked back to the pit to get some help. We dragged the mower across the track and down the pit lane until reaching our pit, where we eventually decided that the steering we had was simply not safe enough to race with. Even if we welded it back together (again), it's not up to the job and will only throw one of us into the bales (again). You can only take so many violent accidents from the steering becoming disconnected before it's too scary to want to drive, so we decided to retire from the race, after about 5 hours.

Les came by and told us to get it welded and get back out there, but I don't think he'd have said that if he'd have been driving it. 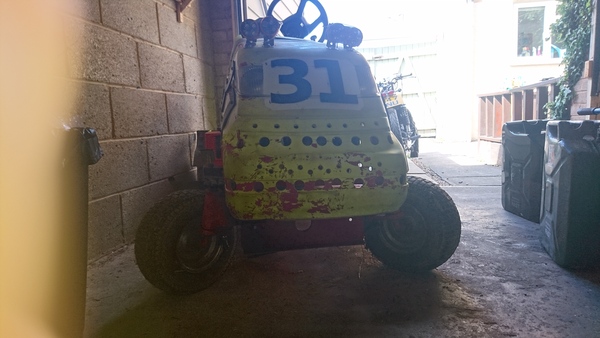 So that's our story from this year's 12 hour. We're going to replace the steering with something more appropriate and enter again next year, along with a few other improvements like further lowering the ride height and centre of gravity, improving the lights, and putting something at the side of the seat to stop us falling out.

(Photographs are taken by me, James Nicholls, Ian Clark, and Jason Ingold. I don't necessarily have the right to use all of them so if you think I've used your photo unfairly please contact me and I'll sort it).