Bitcoin wallets give you a mnemonic seed to write down and keep safe. This is usually 12 to 24 words from the BIP39 word list. But if you write it on paper, it is easily damaged by flood or fire. An improvement is "Cryptosteel"-type devices, which allow you to record the mnemonic seed in metal, such that it is recoverable in the event of flood or fire. I built one myself. 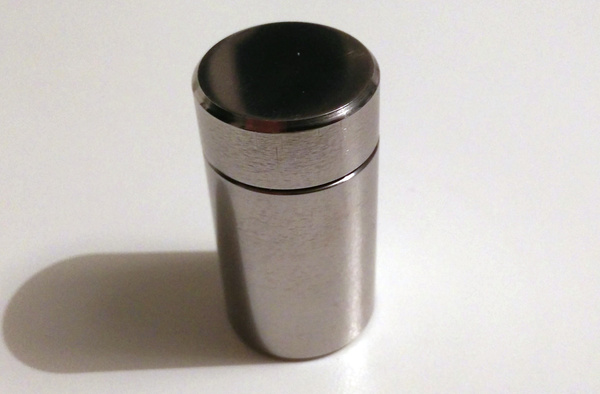 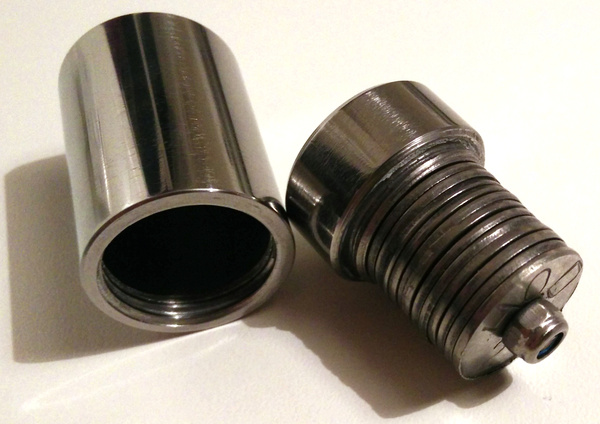 Jameson Lopp writes an interesting series on Metal Bitcoin Seed Storage Reviews in which he (sometimes destructively) tests various metal seed storage products with water, fire, acid, and a hydraulic press, and reports on how well they perform.

Most of the metal key storage devices work like this (the original Cryptosteel product): 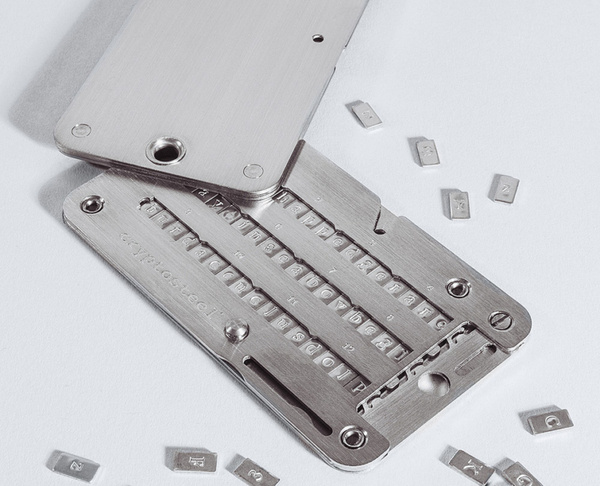 You slide in some thin metal tiles to spell out your seed words. Unfortunately, after a bit of abuse, it looks more like this: 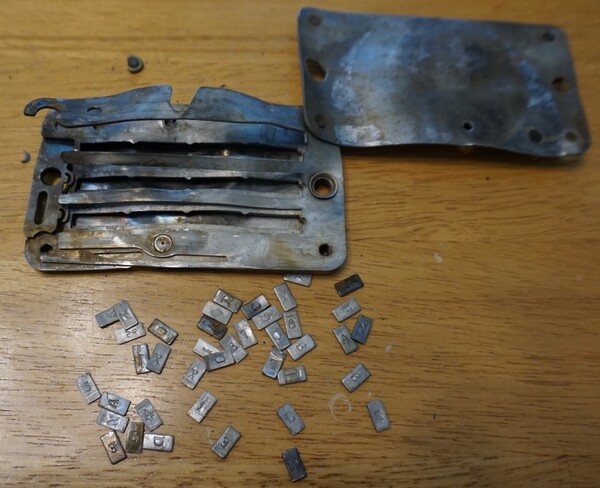 And you can no longer recover the seed because all the tiles have fallen out.

I particularly liked the design of the Cryptosteel Capsule: 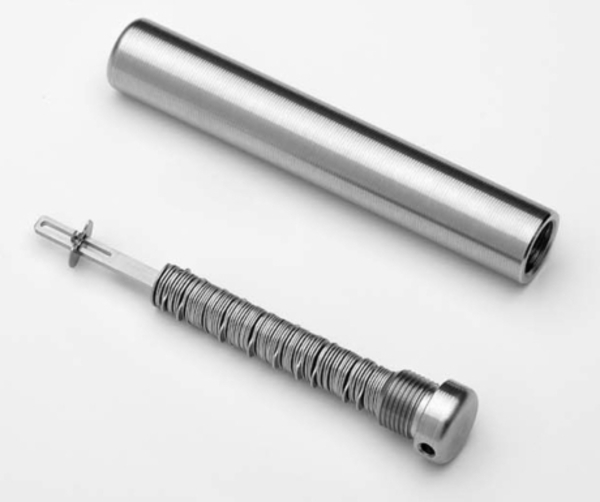 It comes with a bunch of thin metal tiles with letters on. To record the seed phrase, you slide the appropriate letters over the central shaft to spell out the words, then put a retaining clip on the end, and screw the whole thing together inside the capsule. The design is good because it is all stainless steel, making it well-hardened against fire and water, and the inside of it is sealed, which means for anything to actually damage the data, it would have to break through the outer case first. The design is both attractive and easy to manufacture. Unfortunately at €89 it is a bit expensive.

A flaw in the design of the Cryptosteel Capsule is that if you happen to undo the retaining clip and spill the tiles all over the floor, you can no longer recover the key.

Making a load of tiny tiles with single letters on them sounds annoying and time-consuming, and still comes with the problem that spilling the tiles results in loss of the key.

However, since I will be having to stamp the letters on the tiles myself anyway, I am free to put more than one letter on each tile! If the tiles are large enough, each tile can store an entire word of the seed phrase, along with its number, and what's more it can have one word on each side of the washer. If you spill all the tiles on the floor, you just need to rearrange them in order of the number, and you've recovered the key. This is an improvement over the Cryptosteel Capsule, but isn't easy to do with a mass-produced device. Perhaps you could ship it with a letter-stamping kit, although that's a bit burdensome for the average customer to have to deal with. Neatly stamping letters into stainless steel is not easy. 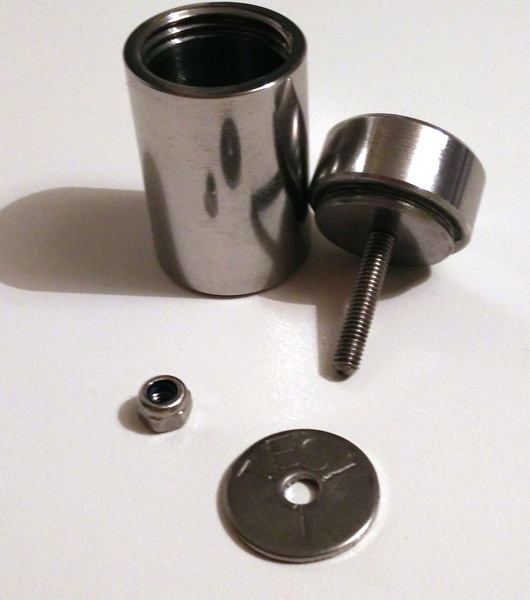 There isn't room on the washers for more than maybe 6 letters, but BIP39 words are uniquely identified by their first 4 letters, so it's not an issue to stamp only 4 letters even for longer words.

To make the capsule, I bought a short length of 25mm "303" stainless steel rod off eBay to make the capsule out of. Mostly this was straightforward, start by making the main body that the washers go inside. This is a length of rod with a hole bored up the middle (but not out the bottom), and a female thread cut in the top. The lid is a shorter section of rod with a narrower section turned on the end and a matching male thread cut on that. Then it needs a small hole up the middle and an M4 thread to accept the threaded rod up the middle. Some chamfers on the ends, and a bit of polishing, and it's done.

I don't have a lathe tool suitable for cutting internal threads, but I do have a boring bar with a 60-degree tip on it. I improvised by angling the boring bar so that it cuts an angle suitable for a thread, but the depth of the thread inside the capsule is limited by how deep I can get the tool in before the back of it crashes into the work. Hopefully this picture illustrates what I mean: 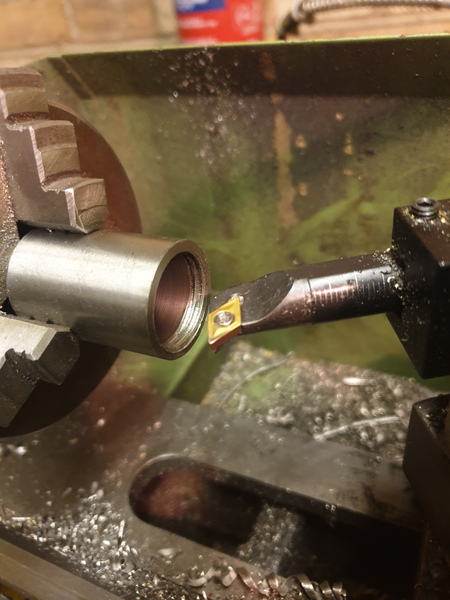 I had a tool for external threading, but it was a bit too large to thread up to the shoulder, so I ground a flat on the edge of it to clear the shoulder and it did the job.

I didn't actually have a stainless nyloc nut on hand, so currently there is a plated steel nut on the end, but it could easily be changed and in any case it's not a serious problem if the nut rusts.

It cost me about £14 in materials, and for that I received not just the parts for the capsule, but also the enjoyment of spending the time making it. In my opinion it is superior to the commercial one, because you don't lose the key even if you spill the washers, and its shorter length means it is easier to stash away and less likely to get bent if crushed.