Isopath is a game invented by YouTube user pocket83. The game was initially presented in this video where pocket83 shows how he made the board and tiles, and then explains the game rules from 15:45 onwards. Isopath is a zero-sum, turn-based, deterministc, perfect-information game, which puts it in the same class as games like chess, draughts, go, noughts-and-crosses, etc.

I 3d printed a few sets for myself and some friends, and we've enjoyed playing it. If you like this sort of game, you should try a few rounds of Isopath. I think you'll like it too. 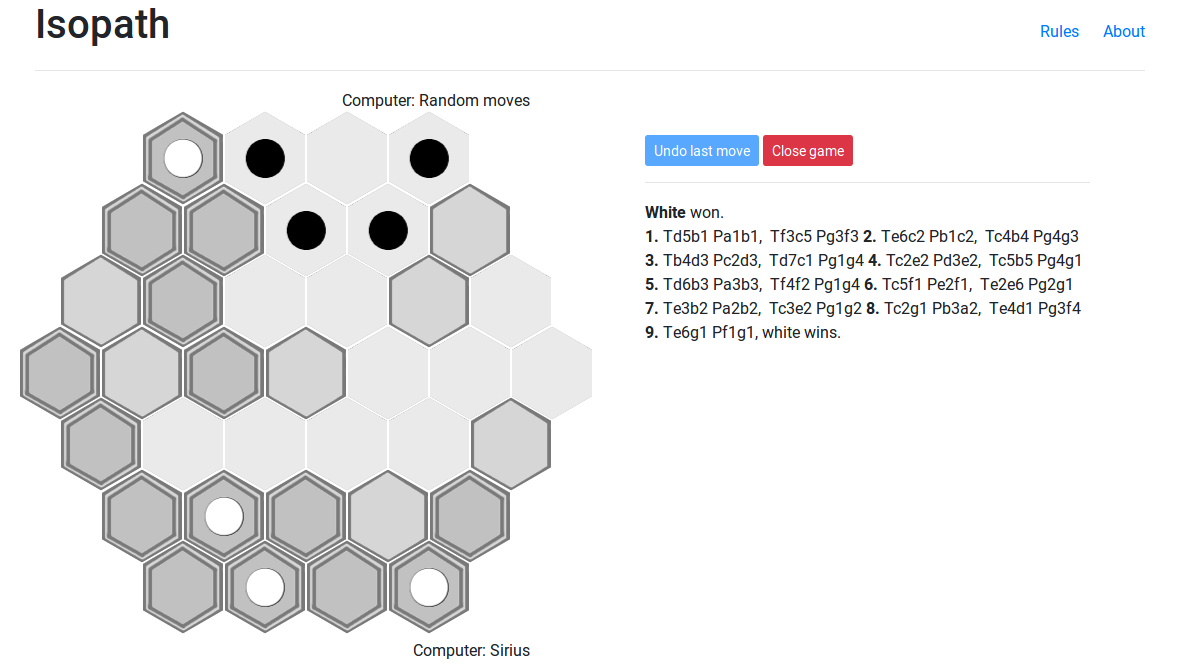 Over the last week I've been working on a browser-based implementation of Isopath, which you can play at https://isopath.jes.xxx/. You can play with a friend either locally or over a websocket connection, or you can play against an AI locally. There are 2 AIs available at the moment, one just plays random moves, and the other is a relatively-serious effort, but not good enough to beat a human who knows its weaknesses.

The gist is that two players each have 4 pieces on a hexagonal game board, starting at the edges on opposite sides. 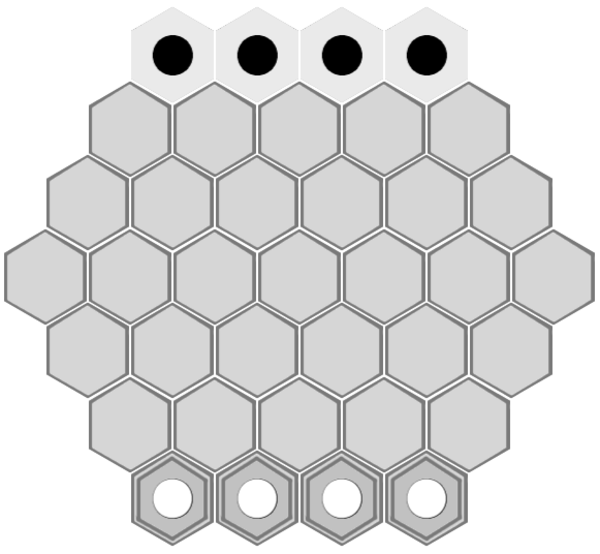 That's not quite all, you can learn the full rules either from pocket83's video, from his rule sheets (sheet 1, sheet 2, sheet 3) , or from my write-up of the rules. You'll get a better feel for the rules by playing the game.

It's helpful to be able to unambiguously identify the spaces on the board. For this reason, I propose labelling the tiles as in this image: 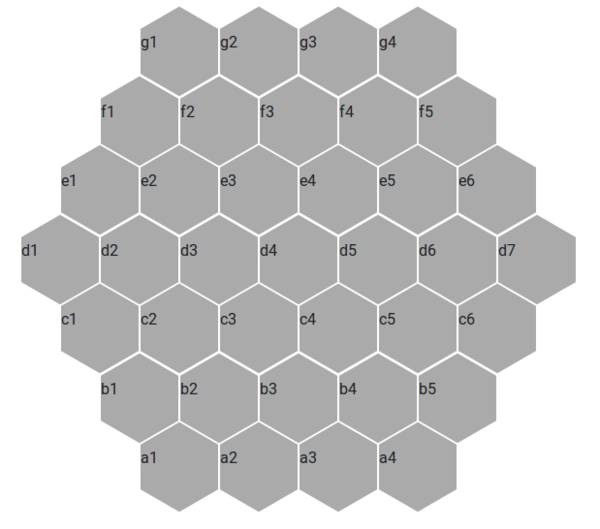 (i.e. the rows are labelled a to g, and the cells within each row are labelled starting with 1 at the left, from white's view).

White always starts on the 'a' row.

For correspondence play (and otherwise), in order to write down the sequence of moves made in the game, we need a move notation. Pocket83 didn't suggest any notation to use, so I am using a capital letter to signify the move part type ('T' for tile, 'P' for piece, 'C' for capture) and then either 1 or 2 coordinates to signify the affected tiles.

For the sake of consistency, I also propose standardising that white always moves first (this does not affect the nature of the game as everything is symmetrical). A representative game might look like:

Now we get to the meat of what I wanted to talk about.

(Some of the examples are rather contrived and exaggerated, in order to best demonstrate the principles, but never mind that; the principles still apply in normal gameplay).

1. A piece can not be stopped from advancing at 1 tile per turn, on a path that has all of the tiles at the correct height, except by threat of capture 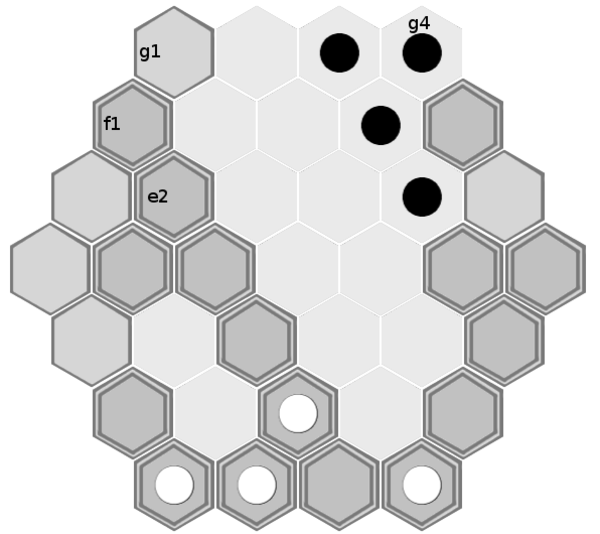 With black to play here, there is nothing black can do to prevent white from winning. Black can remove a tile from white's path each turn, but white can immediately put it back and progress 1 further tile.

Although the spaces g1 and g4 are considered adjacent, black can't teleport from g4 to g1 because white has already placed a tile on g1 (which black is not allowed to remove because it's on his home row).

If black does attempt to threaten e2, we reach something like this position, with white to play: 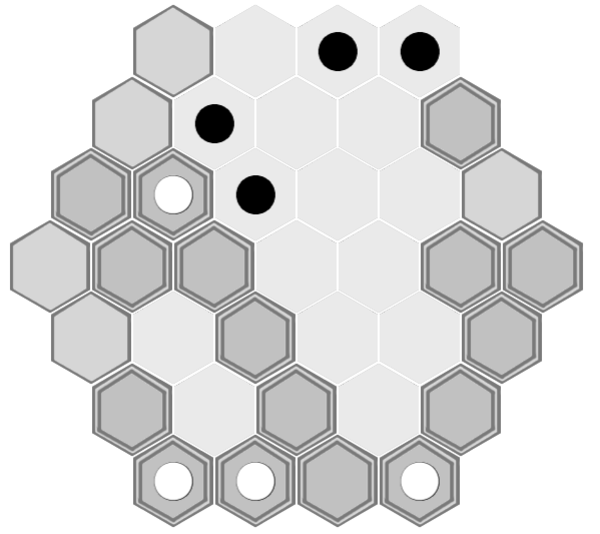 White simply restores the tile on f1, steps on to f1, and then wins in the following turn.

2. A piece can advance at 1 tile per turn, on a path that has all of the tiles at the middle height, except where explicitly stopped 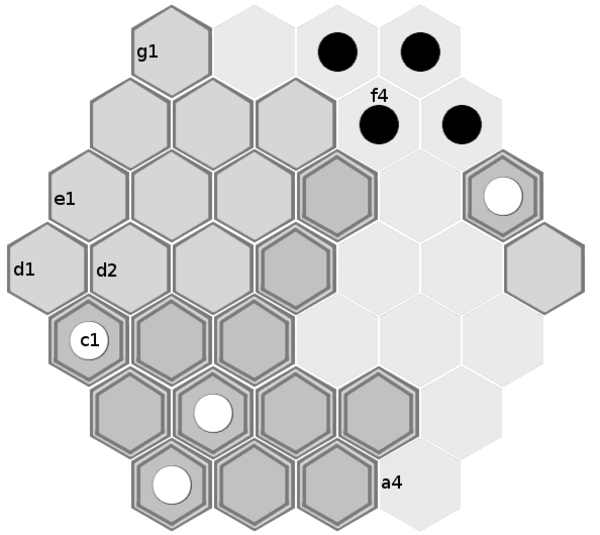 With black to move.

Black was paying attention last time, and knows that his 5-turn path from f4 to a4 can't be stopped by white. However, white's path from c1 to g1, while not at white's full tile height, is potentially 1 turn shorter than black's path if black plays poorly. If black single-mindedly moves his piece towards a4 without concern for which tiles he moves on the board, he'll find that white is able to continue placing 1 tile and moving his piece 1 space per turn, and white will reach g1, winning the game for white, immediately before black is able to step on to a4. 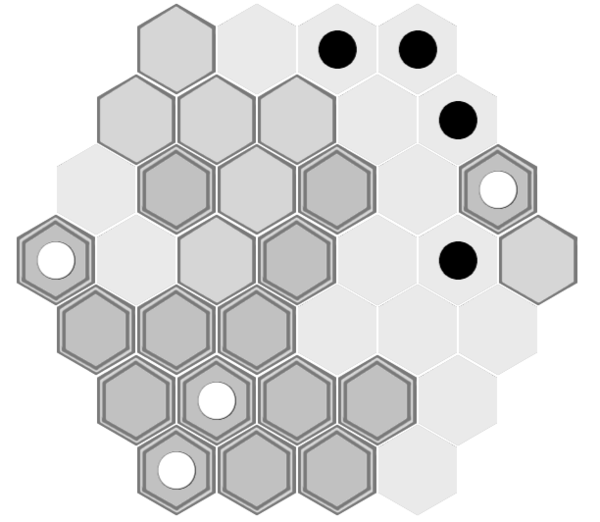 Black's best path is now shorter than white's, and black wins the game. (Black could have captured white's piece on e6 on either his second or third turn, but doing so conveys no advantage here. It would mean forgoing either one tile movement or one piece movement, but black would still be able to block white's progress and would still win the game).

3. It's easier to threaten capture in the middle of the board than at the edges 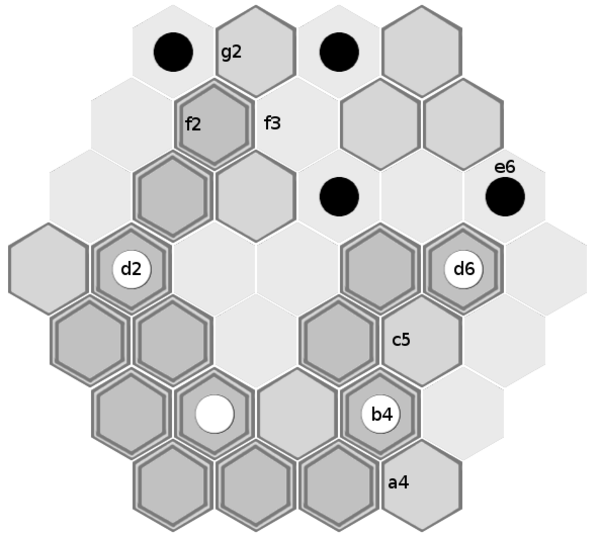 The only way white can threaten capture of black's piece as it heads towards a4 is if white can move one of the pieces from b4 or d6 to c5. Therefore black's move is to remove the tile from c5 and start moving towards a4:

4. The row immediately in front of your home row is very vulnerable

Once your opponent has a piece on the row immediately in front of your home row, your only way to stop him from winning the game is to threaten him with capture (or to physically have a piece in the way). If you can't, or don't, put him under threat this turn, then he will win. On his next turn he alters a space on your home row by 1 tile, and you can't capture him because you didn't put him under threat last turn. On his turn after that he finishes altering your home row and wins: 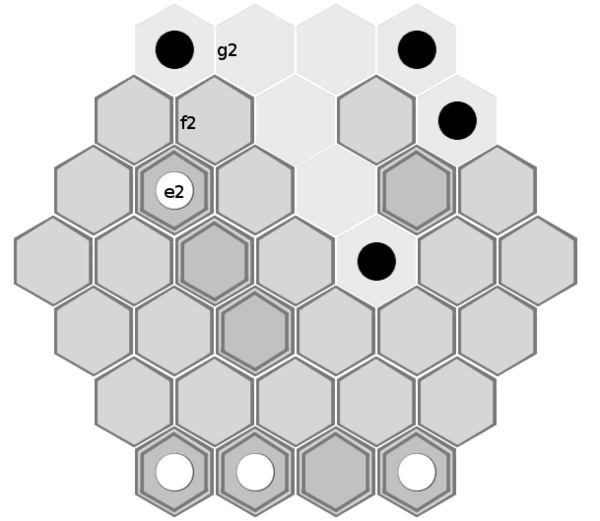 White to move. By this point it's too late for black to stop white from winning. White moves a tile on to f2 and moves the piece from e2 to f2. He's now on the row immediately in front of black's home row, so black's only way to stop him is to threaten him with capture. Black can't do that this turn because his pieces are too far away, but he can take 1 step towards. On white's turn he places the first tile on g2 and moves a random piece other than the one on f2. Black can now get close enough to put f2 under threat, but on white's turn he places the second tile on g2 and wins.

Black should have noticed this coming sooner and made sure either not to have his pieces so far away, or to defend the vulnerable row to stop white from being able to step on to it.

(As an aside, I think 2 players who persistently defend this row will end up in a stalemate that neither player can break without losing the game. I'm not sure how the rules could best be tweaked to avoid this, or if doing so is even beneficial).

5. There's no need to fully develop any space on your opponent's home row until the final move that wins you the game

Since every turn consists of 2 parts, you will always be able to perform the final tile move to fully develop your winning space during your final winning move. Therefore, to fully develop any space on your opponent's home row, before the move that wins the game for you, is to rob yourself of one tile move earlier in the game.

(Of course, if any other possible tile move would weaken your position, it's perfectly reasonable to use your opponent's home row instead. But that's rarely, if ever, the case).

If you threaten an opponent with capture, and you also manage to threaten his only escape route, then you can force a capture of his piece.

Here's a position that came up in a game between the AI (white) and me (black), with black to move: 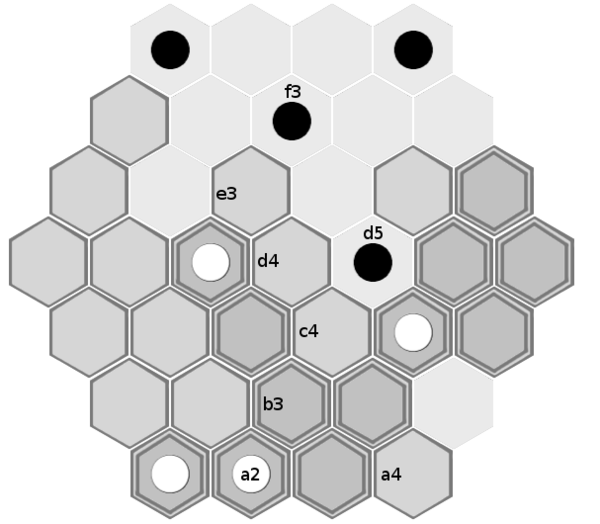 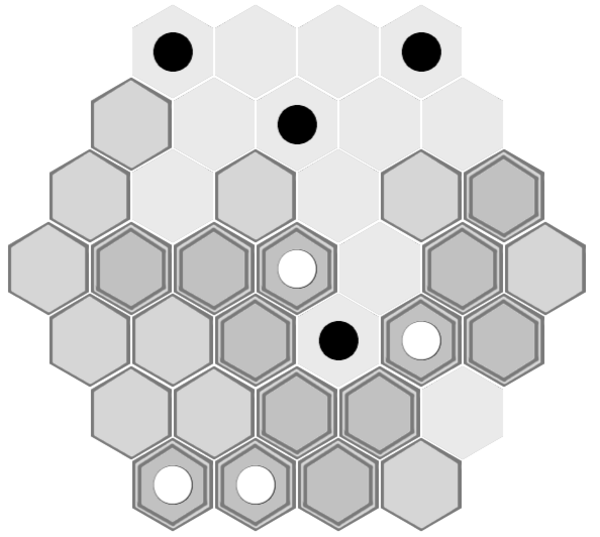 And from there black has no way to save the piece on c4, because the only immediate escape is threatened, and any other escape route will take at least 2 turns to move on to.

If black had brought forward the piece from f3 sooner, threatening d4, that would have prevented white from being able to move on to d4, making it safer for black to move on to c4. White could still move on to c3 to threaten c4, but black would at least be able to avoid the forced capture.

White to move and win in two: 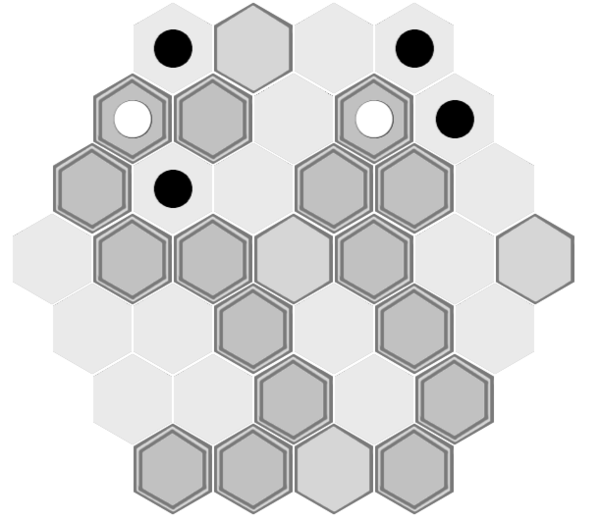 That's all for now. I hope you enjoyed it. I have developed quite the obsession with Isopath recently, and I think you will too if you give it a try.

In the future I intend to write some more about tactics, and also about the challenges in writing an AI, and promising approaches.

Please get in touch if you want to talk about Isopath, play Isopath, or write an AI to play Isopath: james@incoherency.co.uk.