At the weekend, Bristol Grammar School played host to the June 2019 Bristol Chess Congress, the "13th Steve Boniface Memorial". It's a 5-round Swiss tournament, with 3 sections: open (for international rated players), major (players with ECF grade under 160), and minor (ECF grade under 120). Having never played in a rated tournament before, I don't have an ECF grade at all, so I was obviously in the minor section.

The first game was on Friday evening. I arrived half an hour early, not knowing what would be expected of me before the game. It turns out: absolutely nothing. You just look at the sheet to see which board and colour you're playing, and then go and sit in the correct chair before the game starts. So I had the best part of half an hour to sit around wondering what I was doing there.

Tim hadn't arrived at the time the game was supposed to start, and I wasn't completely sure whether I was supposed to start his clock or not. Eventually I started it, and then eventually he turned up, about 3 minutes late. I subsequently saw him do this in at least 2 more games, so it's probably psychological tricks. Fair enough.

I thought the game mostly went well. Tim had a bit of an attack going, and I thought I had successfully fended it off. We reached this position: 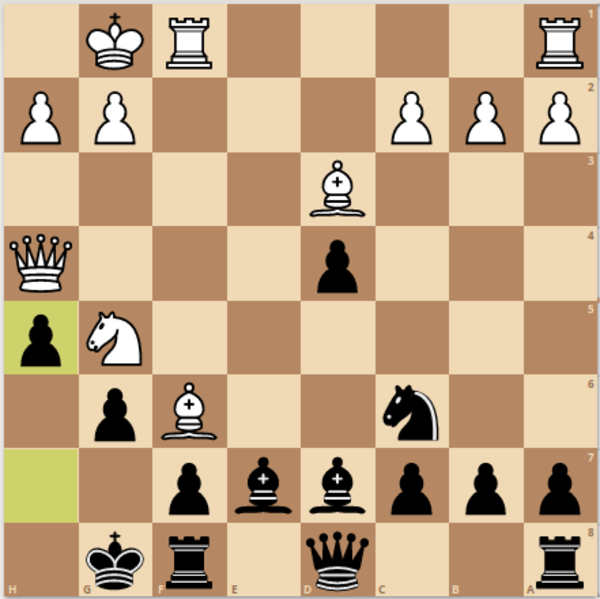 White to move and mate in 2 (answers at bottom).

Tim found the correct move, and after staring dumbfounded for a minute or so, I resigned. But that's a nice finish, I don't mind losing to that. After the game he said he thought I defended well, but I think he was just being nice.

This game was on Saturday morning.

Mayank Palav can't have been much older than 10, so I was not expecting a very difficult game.

It was mostly a pretty even game. After 31 moves we reached a king-and-pawns ending which I thought was winning for me, but which Stockfish assesses as dead equal. Unfortunately, I cocked it up and Mayank didn't, and I resigned when it was clear that he was definitely queening a pawn and I definitely wasn't: 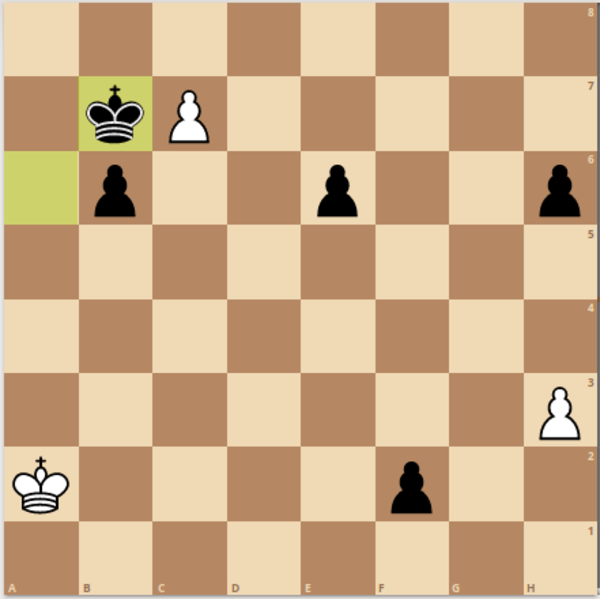 During the game, I thought Kawagasabai played the opening really badly. I thought he had just lost a pawn for no reason, so I was feeling pretty chuffed with myself. After winning the pawn, I withdrew my bishop to avoid any trouble with his knight coming to g5 and then f7, and according to Stockfish this is where my problems began. After move 7 I realised I was in trouble, and it actually took me a long time to find a plan that didn't result in getting mated imminently. So I lost a knight on move 8, but the game continued.

I subsequently learnt that the opening he played has a name. It's the Scotch Gambit, and I walked headfirst straight into it.

So after losing a piece, but not getting mated, the game continued. We traded off most of the pieces, and then reached an ending where he still had the additional piece, and was able to slowly hoover up all of my pawns, and I eventually resigned: 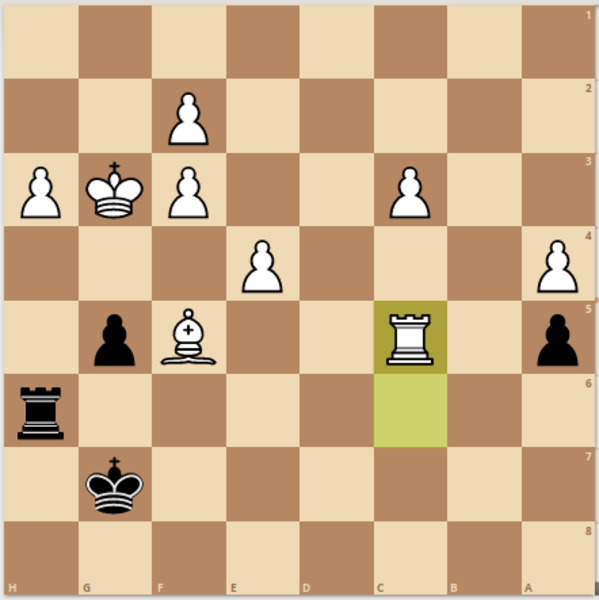 So this game was essentially won in the opening. Tricksy bloody e4 openings.

I was feeling pretty low about my chess on the Saturday evening. The way the pairing system works is that you generally play games against people who have performed about as well as you have. So if you lose your first 2 games, chances are you'll play the 3rd game against someone else who has also lost their first 2 games. So I'm playing against the worst people, in the lowest-rated section of the tournament, and losing every single game. This is not what I'm used to when playing online.

The pairings sheet said I was given a bye, as there were an odd number of players playing that morning. You can request a bye in the tournament, for which you receive half a point but don't get the chance to play a game. Since I did not request this bye, I received a full point instead, although I did not understand this at the time.

The arbiter informed me that if a player doesn't show up, I'll have a game against the person with no opponent, and in the event that everyone shows up, I'll have a game with John instead, who isn't actually playing in the tournament. About 5 minutes into the round, everyone had arrived, so John and I sat down to play.

The game was mostly very equal, and took a very long time. John was using a lot of time, and started getting in time trouble towards the end. After one move he forgot to hit the clock, and I pointed it out to him as I wanted to win the game on the board rather than by him blundering the clock. He also offered me a draw at one point but I declined.

After about 3 and a half hours of playing, we reached this position. I'm a piece up, all my pieces are good, and Stockfish evaluates the position as 10 points better for black. It's clearly winning for black: 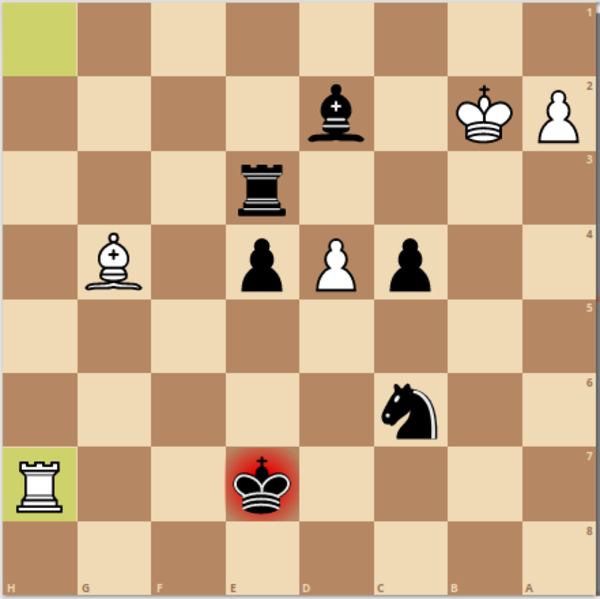 Now: black to play and find the only losing move (answers at bottom).

John was in a lot of time trouble here, and I thought he obviously didn't have any winning chances, so I just quickly moved my king out of check, towards John's king, to potentially help with mating him. Unfortunately, I found the only losing move. John spotted the checkmate, so I lost this game as well.

I was frustrated to lose this game. Not least because I'd helped John with his clock, and also refused a draw. John said he genuinely felt sorry for beating me. I was pleased, though, that I had at least managed to reach a winning position. In the previous 3 games I was just equal or lost, with no real chances.

I received a full point for playing it anyway. Still would have been nice to win one. Currently at 0 out of 4.

I was quite tired going into this game, having played 4 long games over 3 days, and particularly after the previous game lasting 3 and a half hours.

It was mostly a pretty equal game. I had an opportunity to win a piece during the middlegame, but failed to spot the tactic. We reached a position where Louis had a bishop and a rook, I had a knight and a rook, and I had an extra pawn. I was quite happy with this position, although it wasn't quite clear how to win it. Louis made the mistake of trading off the rooks, which made things a lot simpler. My additional pawn was useful as it was well-positioned to stop his pawns from queening: 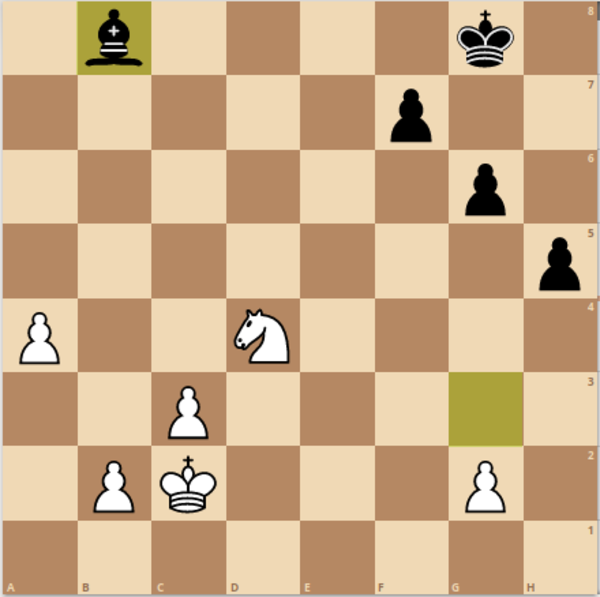 The biggest question I had at this point was whether it was more important to quickly queen one of my pawns, or to use my king to try and stop his pawns. I eventually decided to move the king across and was able to successfully block his pawns: 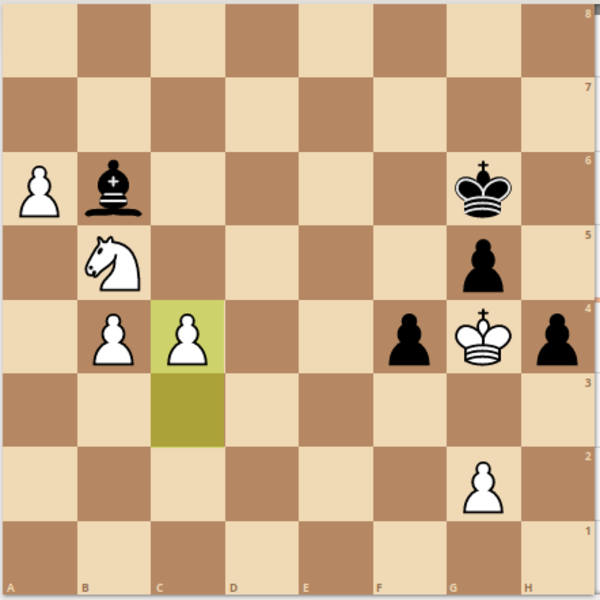 I actually expected Louis to resign at this point, but he played on. It was quite a straightforward game from here, and I eventually checkmated him!

That was great fun. I was delighted to finally get a win, and it was a fantastic end to the tournament. Louis and I went over the game on a spare board in the "analysis room" afterwards, which was a useful chance for each of us to learn what the other was thinking.

And thanks to my full-point bye in game 4, I actually beat Louis in the final standings, even though he also won one game.

I was ranked 29th in the minor section in the end, but without the full-point bye I would have been joint 33rd.

I thoroughly enjoyed the tournament and intend to play in more.