At the weekend, I took Wedge of Glory to an antweight combat robot tournament in Hinckley called Ant Freeze 7.

While in Hinckley we visited Twycross Zoo and the Triumph Factory Visitor Experience. The Triumph factory tour was excellent. Compared to the Toyota tour that I've done before, the Triumph factory is less impressive, but the tour is much more detailed and you actually walk around the factory floor instead of a raised walkway. They show you parts storage, machining stations, a CNC measurement room, the paint shop, engine assembly line and motorcycle assembly line. Really interesting, I highly recommend it.

We arrived at the tournament venue at about 9.15am on the Saturday morning. The first order of the day is to get the robot checked, and pay the entry fee of £2. The robot must fit inside a cube of 4 inches on each side, and weigh no more than 150 grams. My robot weighed in at 151 grams. This was accepted, however. A last-minute modification I had made was to add insulating tape around the edges of the robot to cover up the join between the chassis halves, just to remove them as a potential grabbing point. This is probably what pushed the weight up. 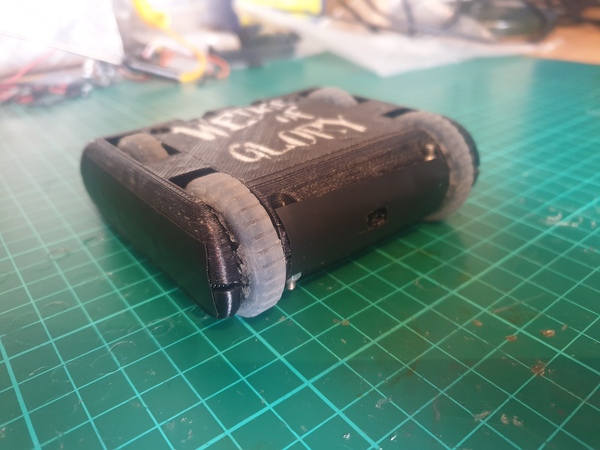 The other issue was that I couldn't get the robot to fit inside the cube without squashing it, even though we know from the CAD model that it should fit, and the play in the hinge should make it fit in real life more easily than in CAD:

I am suspicious that the cube they were testing with was ever so slightly under-size (e.g. 100mm instead of 4 inches). In any event, it was deemed close enough to be acceptable, and I didn't have to make any modifications.

Some people bring more than one robot, and these are grouped into "teams", with a limit of 3 robots per team. The fight scheduling algorithm assigns the teams with 3 robots to groups first (so that they don't have to fight themselves during the group stages), followed by the teams with 2 robots, followed by the teams with only 1 robot. This meant I was one of the last robots assigned to a group, and it also happened that my group had an odd number of robots, which meant I was given a bye in round 1. In total there were 111 robots entered. The result of all this is that my first fight wasn't until 1.30pm. It seems a bit unfair that some people could conceivably have 6 fights before others have even had their first, but that's the way it is.

The tournament format is called "double elimination". It's a bit like a normal tournament bracket with a group stage, except you're not knocked out until you've lost 2 fights.

Emma filmed all of my fights, so if you want, you can watch a video of Wedge of Glory at Ant Freeze 7.

I've forgotten the name of the robot that the second fight was against, but it is a 2-wheel-drive flipper with a TinkerCAD logo on the flipper. More through luck than judgment, I just drove straight forwards, managed to get the wedge underneath the front of the other robot, and then drove it straight into the pit. I was beginning to think I might be quite good at this.

The third fight was against a "cluster" called Wedge Wedge Wedge. This consists of three 2-wheel-drive wedges. It's hard to know which one to aim for, and I think I managed to confuse myself and quickly drove my own robot into the pit. A combination of stupidity and inexperience, I think.

Next I was up against a robot called "Jammin' Good with Weird and Flippy" which is a 2-wheel-drive flipper with a steel front on it. Luke, the operator of this robot, seemed quite confident that his flipper was closer to the ground than my wedge and therefore I wouldn't be able to get underneath him. It turned out the opposite was true, and Wedge of Glory quite comfortably drove underneath Jammin' several times, before eventually leaving it on the edge of the pit, where it fell in on its own. Winning this fight meant I reached the final 16 which was quite exciting!

My final fight was against a robot called CATanix which seems to be a 2-wheel-drive wedge. It looks like they swap out the nature of the wedge on the front based on what type of robot they're fighting, which seems like a good idea. I was thoroughly out-driven in this fight. CATanix quickly manouevred around to the side of Wedge of Glory, and got the wedgelets underneath. I was desperately trying to wriggle free but I think all of the wheels were off the ground, and I had no control. I was eventually dumped into the pit, and knocked out from the tournament.

After the main tournament was over, there was a "Gladiator" fight in which anybody who wants to participate can chuck a robot in the arena all at once. There were about 30 entries, and it was chaos. I got flipped upside down a couple of times, which was my first opportunity to use the controller inverting switch, which worked but wasn't as easy to reach as it could have been. I eventually managed to drive myself on top of a pile of robots stuck in a pit and was unable to drive off again, so that was the end for me.

The "Gladiator" was the only fight in which Wedge of Glory sustained any damage, and even watching the video back I can't really tell what happened. It looks like something took a small bite into the end of the wedge and ripped off some of the plastic: 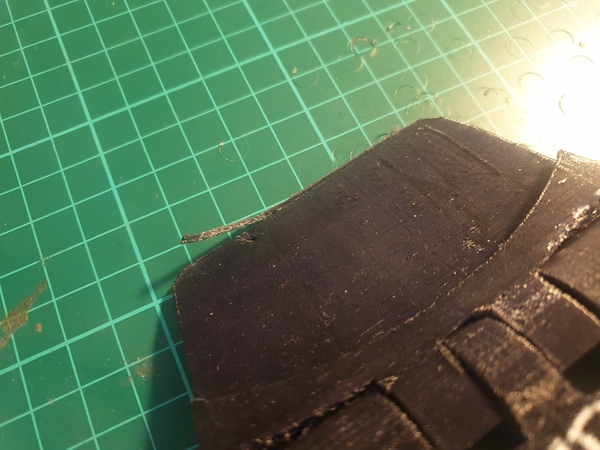 I would have liked to have had a 1-on-1 fight against a spinner, as I still don't know what would happen. Most of Wedge of Glory is printed with quite low infill and only 1 perimeter in order to save on weight, so it's quite possible that a spinning weapon would easily pierce it.

I received a few compliments on the quality of the engineering in Wedge of Glory, which I didn't expect. I think possibly this is because I used less hot glue and blu-tack than many of the other competitors.

At the start of the first fight, the robot stopped responding to my inputs properly as soon as I shut the lid on the arena. I opened it back up and switched the robot off and on again and then it was fine. The same thing happened at the start of the second fight, but it was fine for the others. I don't know what was going wrong.

The receiver used in Wedge of Glory is a FlySky FS-iA6. It's the standard one that is delivered with the controller and weighs about 9 grams. I subsequently learnt that most people are using alternative receivers that weigh less than 1 gram! Switching to one of those would free up quite a lot of mass that could be added to the thickness of the 3D-printed parts.

In order to charge Wedge of Glory's battery, I need to remove all of the insulating tape around the edge, and undo the 4 screws that hold the chassis halves together, to gain access to the charging plug. This is annoying and time-consuming, and reassembly is fiddly. An improvement would be to make a hole next to the power switch through which the charging plug can be accessed, so that the battery can be charged without having to disassemble the robot.

The main design flaw that I discovered was that Wedge of Glory is very vulnerable to other wedges lifting it up from the side. This is how I lost the fight against CATanix. Possibly it would help if the wheels were moved outwards, closer to the outside edges, so that when the robot is tipped up slightly it still has wheels on the ground and can potentially free itself.

I'm planning to build at least 1 more robot for the next competition, and possibly 2. One idea is I'd like to clone Robert Cowan's Kamikaze robot, but in the antweight class. This has a large spinning weapon that traces out a path around the entire perimeter of the robot so that nothing can contact the robot without getting hit by the weapon.

Another idea is to have a large "skip" that unfolds at the start of the fight big enough to fit other robots inside, and with a ramp at the front. Once the other robot is inside the skip, the ramp at the front would be brought up to form another wall on the skip so that the other robot is trapped inside. Then you just drive over to the nearest pit and empty the skip into it. It would be quite challenging to actually make this, but it would be cool if it works.