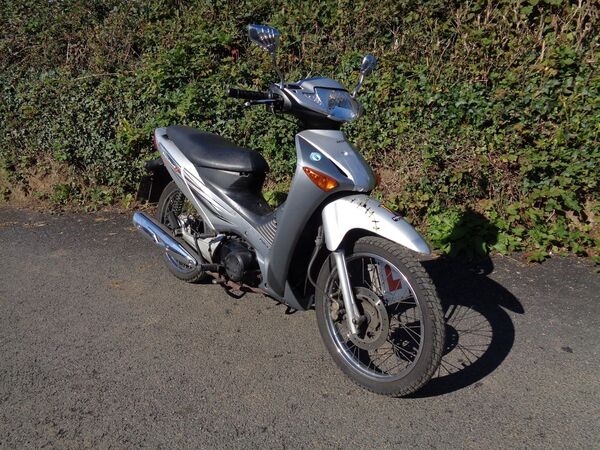 Isn't she a beauty? 8 years old and with 48k miles on the clock. It's obviously been crashed a few times.

I also ordered a YX140 pit bike engine. Although 140cc is not much of a capacity increase, the YX140 is designed for racing and is (I hope!) quite a lot lairier than the commuter-oriented engine the scooter came with. I want it to be a "sleeper" scooter: it'll look just like a normal scooter, but with a lot more power.

Since I made the mistake of buying a fuel-injected scooter, I'll have a little more work to do than I initially expected: the speedo is electronic, the ignition barrel is electronic, and the fuel pump is too high-pressure for me to be comfortable plugging it into a carburettor.

The scooter has a semi-automatic gearbox which takes a bit of getting used to. Gears are changed manually, but there is no clutch lever: it seems as though moving the gear lever disengages the clutch automatically. There is also a centrifugal clutch to stop it from stalling when not moving. The YX140 engine has a manual clutch which should be a bit more pleasant, although it means I need to fit a clutch lever, which is easier said than done due to all of the plastic that the handlebars are inflicted with.

Still, it should be a relatively simple project. The main problems to solve are:

And if I cross my fingers really hard, the carburettor might fit in place without fouling on the frame, and the exhaust might fit with no modifications.

Fortunately, Honda also made a version of the scooter with a carburettor instead of fuel-injection, so I've acquired a secondhand fuel tank from a carburettored scooter, which comes with a gravity-fed fuel line instead of a pump. The fuel level sensor is simply a potentiometer with a float attached to it: when the fuel level drops, the float drops, and the resistance increases (or decreases?), which is then reflected in the display on the dashboard.

The connector for the fuel level sensor is different between the two models, as the fuel-injected one also includes wires to drive the fuel pump. I worked out which wires the computer expected to be connected to the level sensor and fitted a connector on those, which seems to work so far.

The electronic ignition barrel means there is no convenient way to switch the new engine off with the key. At least, I haven't found a convenient way. Normally there would be a wire that gets connected to ground when the key is off, which can be used to ground the spark signal and prevent the engine from firing. My intention is to let the ECU stay in place, and let it deal with driving the dashboard, lights, etc. but not give it any control over the engine as I don't trust it. The new engine comes with a CDI box to control its ignition, and the carburettor controls the fuel, so the ECU wouldn't be doing anything useful for the engine anyway.

I might be able to find a wire in the loom somewhere that would kill the spark when the key is turned off, but the ECU won't be getting any of its normal sensor inputs and I'm afraid that it might eventually panic and try to kill the engine at some time when the key is not turned off. My current plan is to have the engine completely independent of the ECU, and use a separate key under the seat to turn the "real" ignition on and off. Having 2 keys is obviously a little bit inconvenient so I'm interested in hearing better ideas.

With the original engine the scooter is good for about 60mph, which is perfectly acceptable. My aim is to have the top speed around the same, but with more torque available at lower speeds. It would be extra fun if the YX140 is powerful enough to wheelie it without touching the clutch, but that might be a bit too much to ask...