I tried to make a vinyl record on the lathe

In order to produce sound, a record player needle needs to ride in a track that has a tiny physical model of the waveform of the sound.

A poor cut on the lathe can produce "chatter", which causes a wavy surface, accompanied with some sounds. I think it's likely that the wavy surface is a physical model of the waveform of the sound (i.e. the sound is caused by the cutting tool bouncing back and forth).

Looking at it the other way, the tool imparts an image into the work piece which is a mirror of the sound the tool is making. So let's play some loud sound on the tool holder, cut a spiral into a piece of plastic, and then see what it sounds like on the record player!

I cut out a rough circle of acrylic (which I suppose would make this an acrylic record rather than a vinyl record), drilled a hole near the middle, and put a bolt through it. 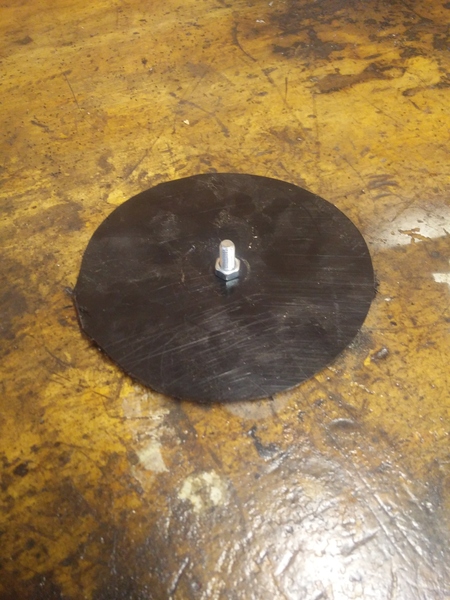 I mounted the bolt in the lathe and tried to take a facing cut to flatten the surface. Unfortunately the acrylic is nowhere near rigid enough. It was just tearing and flexing. But since the plastic flexes out of the way when the cut is too deep, we can probably get away without a facing cut. So I stopped the facing cut halfway along and began the real cut.

Ideally the cut would be performed with the lathe turning at 33 rpm so that the music will be recorded at the correct rate for playback on the record player. My lathe only goes down to 100 rpm so I went with that. To cut a spiral into the surface of the plastic, the tool needs to be advanced across the face by at least 1 tool width per revolution, which is easily done by hand at 100rpm. The pitch of the spiral is not important since the needle of the record player just follows wherever the track goes.

The tricky part is applying sound to the tool so that it vibrates in and out to create our audio track. I placed my mobile phone on the carriage while playing Don't Mug Yourself by The Streets at full volume (the idea being that some of the sound will be transmitted to the tip of the cutting tool) and cut a spiral into the face of my "record": 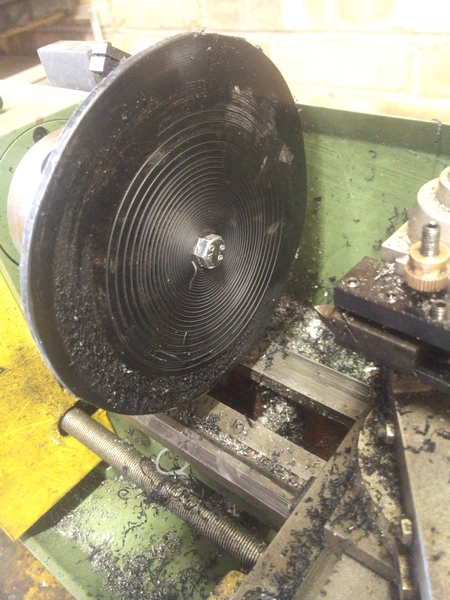 (The mess towards the outside is the attempted facing cut).

I tried to play this on the record player but found that:

a.) I had cut the spiral backwards. Starting from the outside, the needle is pushed off the record rather than carried into the centre.

b.) The needle on the record player can't actually reach the centre of the record, it stops about 35mm out.

I could "play" the sound for about 3 revolutions by starting the needle towards the centre, which did produce sound but it didn't sound like The Streets. It sounded more like the noise the cutting tool made.

So I flipped my record around and had another try, with no attempted facing cut. I ran the lathe backwards this time so that the spiral would be in the right direction. 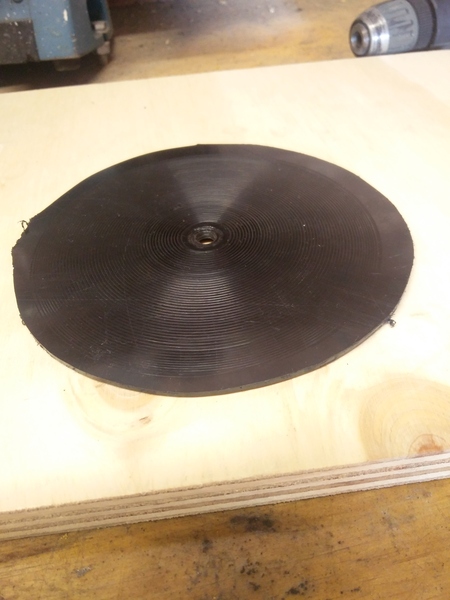 The cut went well, although it isn't quite deep enough in some places. I tried to play this "A-side" in the record player but, other than spinning in the right direction and having more usable area, it was no better than the first attempt.

You're trying to pick out "Don't Mug Yourself" playing at about 1/3rd speed. I'm not confident any of it can be picked out over the noise.

I suppose the real test will be whether I get a copyright strike from YouTube...

Even more than most of my projects, this project was a failure. To make it work you'd need to:

I think it could be made to work, since this is essentially all a "real" record lathe does.