You might have got the impression that there are a lot of Bitcoin-related posts on Hacker News lately. With SegWit set to activate in the next few weeks, and Bitcoin Cash likely to fork off on the 1st of August, I took a look at Hacker News' relationship with Bitcoin over the past years.

In this post I'm going to argue, based on historical trends of Bitcoin-related posts on Hacker News, that there is a Bitcoin bubble coming in the next few months.

(Take this with a pinch of salt. Humans are good at seeing patterns where there are none. Don't trade on this information. Don't blame me if you lose money. Don't say I didn't warn you.)

I used Algolia's HN Search API to collect the HN data, and the 99Bitcoins historical price chart to get Bitcoin price data.

How many Bitcoin-related posts are on HN each month?

I used Algolia to find all of the posts matching "bitcoin" going back as far as possible. This turned out to be far too much to look through, so I restricted my search to only those posts that had more than 20 upvotes.

And here's a chart showing the results: 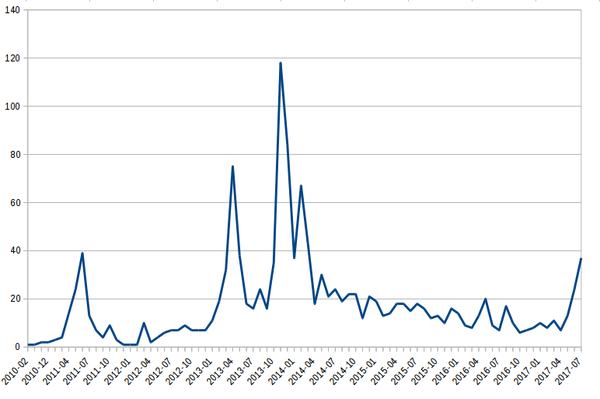 The x axis is time, grouped by month. The y axis is number of posts on Hacker News that match the search term "bitcoin" and have more than 20 votes.

(2010 has a few months missing, so the x axis is not quite linear in time. This is because some months had 0 results and my spreadsheet-fu is weak. I'm sorry.)

Notice the big uptick in Bitcoin interest on Hacker News this month, and compare to historical events.

What were the peaks, and what happened next?

There are 4 periods to pay attention to:

The June 2011 peak in Bitcoin-related Hacker News posts (~40 posts) represented the peak of the bubble, and the following month saw the Bitcoin price decline by about 20% ($16 to $13), with a decline in HN posts.

In July 2017, there was once again a jump up to ~40 Bitcoin-related posts. What will next month see?

What happened immediately prior to those months?

What's going to happen next?

We can try to guess what will happen over the next months by looking at what happened in the past under similar conditions. There are 3 candidate scenarios:

June 2011: price had already gone up 3x the previous month, bubble peaked in this month, and price declined slightly the following month.

March 2013: price had already gone up a lot the previous month, increased 3x during this month, and went up a lot (and peaked) the next month.

October 2013: price hadn't done very much the previous month, increased a lot during this month, and went up 4.5x, to the bubble's peak, at the end of the next month.

If this trend continues, we can expect a Bitcoin bubble to peak in 2-3 months' time, at a large-ish multiple of the current price (maybe about $10,000?).

Looking at the price charts, one might argue that we've just seen the peak of a bubble:

But if we overlay the price on the HN posts graph, we see that historically the uptick in HN posts has coincided with a price increase, but has preceded the peak of the bubble: 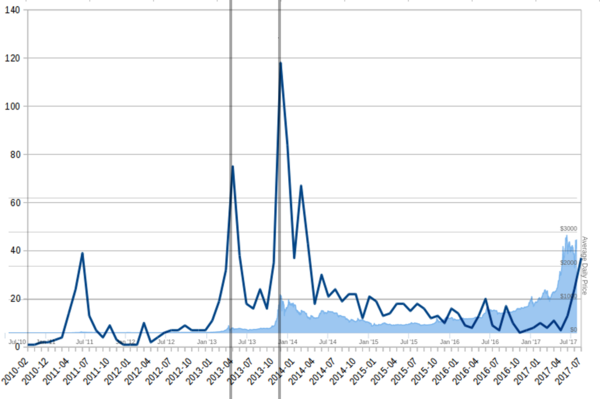 What falsifiable predictions can we make?

All this is fine and dandy, but what can we actually predict?

1. In August, we'll see substantially more than 40 Bitcoin-related posts on HN with over 20 votes.

If this doesn't happen, then history is not repeating itself and the other predictions are likely to be wrong.

2. A Bitcoin bubble will peak before the end of the year.

If prediction 1 is correct, then there is once again rapidly-increasing interest in Bitcoin among the Hacker News community. If this corresponds to increased interest among the wider population, then there will probably be lots of people buying Bitcoin for the first time, with all of the associated enthusiasm and greed. The perfect ingredients for a bubble.

It wouldn't be much of a bubble if it didn't increase the price by a factor of several. If prediction 2 is correct, I think $5,000 is quite a conservative bet. I don't know if I actually believe this prediction, but it follows from what we've seen so far.

If the Bitcoin-related posts on HN have any predictive power, we can expect exciting things from Bitcoin in the coming months. I will certainly be following up a few months from now to see what happened. My "gut feeling" is that $5,000 within 3 months is obviously just wishful thinking. But there has undeniably been an uptick in Bitcoin interest on Hacker News, and historically the only times we've seen HN this interested in Bitcoin is when there's a bubble forming.

The Algolia HN API is really useful for this sort of analysis. It's well-documented and relatively easy to use. While playing around with the data, I also came across the following posts:

In May 2009, the first time Bitcoin is ever posted to HN: Bitcoin: peer-to-peer network based anonymous digital currency. Only 5 votes, and 3 comments. "An exceptionally cute idea, but there is absolutely no way that anyone is going to have any faith in this currency".

In June 2011, one third of the posts were predicting the death of Bitcoin. Examples include Why Bitcoin Will Fail As A Currency. A lot of the comments do a good job of debunking the article, but there is still a general undercurrent of uncertainty about whether it's even legal to use Bitcoin. Fears that governments could stamp it out with the flick of a legislatory pen. One Tulip reference.

In March 2013, Bitcoin drops 10USD in less than 4 hours, followed 1 hour later by Bitcoin goes up $10 in just one hour. People talking about how nobody prices anything in Bitcoin. A rather prescient "Hey, who knows. Maybe my 4 BTC will be worth $1000s in a few years". A bold prediction, "1 BTC under $15 within 60 days", was way off the mark. Since that comment was made, Bitcoin has never been below $70. Someone complains that "$40+ per BTC is VASTLY overpriced". Lots of talk of bubbles. Another Tulip reference.

In October 2013, Safari extension to hide Bitcoin stories on HN. Someone got sick of hearing about Bitcoin. To be fair, October 2013 was peak-Bitcoin for HN, with 118 posts getting more than 20 votes. That's like 4 per day! Somebody else patched the extension to hide stories about hiding stories.

At first almost nobody cared about Bitcoin, then they were skeptical about its legality, or that it was actually worth any "real" money. Nowadays nobody is credibly arguing about these things, and it's mostly moved on to discussion about the technology. People are starting to take Bitcoin seriously.