Living with a Bitcoin debit card

My new project produces profit in Bitcoin. I wanted a way to be able to spend the Bitcoin without having to:

a.) limit my purchases to places that accept Bitcion, or
b.) sell on Localbitcoins and risk the bank freezing my account for accepting money from drug dealers, or
c.) sell on Coinbase and wait 3-5 business days to get the money in my bank account

I shopped around for a Bitcoin debit card and settled on Cryptopay's offering. The card costs £15 upfront + £1/mo. Plus you pay a 1% fee for currency conversion (e.g. converting your Bitcoin to Pounds). There's also a £1.75 charge for withdrawing cash from an ATM, so I won't be doing that.

You do unfortunately have to send photographs of government-issued identification documents for KYC/AML reasons, but it was quite quick and the support staff were very helpful (I initially filled out the form wrong but Alexey sorted it out for me).

The card arrived sooner than I expected: the website said it could take up to 10 days, but it arrived after 3.

Upon opening the package I was a little surprised to find all of the marketing materials referred to MyChoiceCorporate and Wave Crest Holdings. The card is actually issued by one of those companies, but (other than the automated phone line to get my PIN code) I haven't had to interact with them as the Cryptopay website does everything. 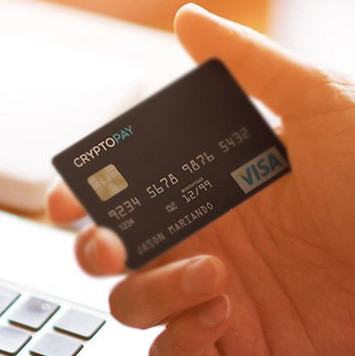 I was disappointed to find that rather than a cool-looking black card with "CRYPTOPAY" written on the top (like the example on the Cryptopay website), it was a generic-looking grey card. I asked Alexey about this and he said they would love to have Cryptopay written on the card, but Visa do not allow it (I assume because Cryptopay are not the card issuer). It would still be cooler if it was black.

I've been using the card for the past week and in most cases it's been no different to using my bank card. The payment authorisations show up on the Cryptopay website immediately, which is a nice touch, compared to my bank where they only show up a few days later.

The only problem I've had is when I tried to buy a new keyboard off eBay and paid with the Cryptopay card, via PayPal.

Since the card is issued from Gibraltar, it seems PayPal actually took payment in Gibraltar Pounds instead of British Pounds, so the card issuer charged me £1.72 for the conversion, and PayPal charged a similar amount as well. I guess PayPal assumed I would have to pay a currency conversion fee, and they may as well take it for themselves instead of giving it to the card issuer. A bit scummy of them, but I'll know to watch out in future.

Overall I'm very satisfied with the card. If you have some source of Bitcoin that you want to use where Bitcoin is not accepted, and you can tolerate the KYC/AML rules, I highly recommend getting a Cryptopay card.