I built my EEPROM programmer with a ZIF socket on a homemade PCB, but you can do it on a breadboard. You won't need any external components: just the Arduino Uno, EEPROM, a breadboard, and some wires. 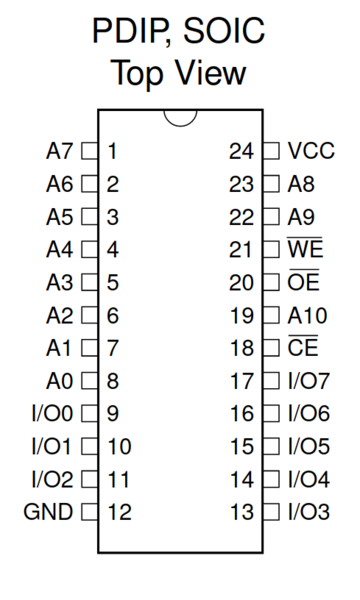 And here's a link to the datasheet.

The first AT28C16's I tried did not work, I believe they are either broken or fake. I subsequently purchased one from themicrohut and it was packaged well, arrived promptly, and worked. I recommend themicrohut and do not recommend "bigvip8018".

If we don't actually need to control "chip enable" (say, if the only purpose of our project is to interact with the EEPROM), then we can tie "chip enable" directly to ground and save 1 pin.

The Arduino Uno has 6 analogue pins, but these can also be used as digital pins.

Use the serial port for GPIO

Arduino pins 0 and 1 are used for serial communication with the PC over the USB cable. Ordinarily you have to decide whether you want to use USB serial (in which case call Serial.begin()), or you want to use pins 0 and 1 for something else (in which case don't call Serial.begin()). But we can actually almost get to have our cake and eat it by turning serial off while interacting with the EEPROM.

If you make sure that pins 0 and 1 are not connected to "output enable" or (most importantly) "write enable", then communication over the serial line will have no effect on the EEPROM. Just call Serial.end() before trying to use those pins, and then Serial.begin() again to go back to using the serial port.

Control an address line by hand

So now we actually are using all of the pins that the Arduino Uno can control, and we're still 1 pin short of being able to use the AT28C16.

My solution for the last pin was to put a manual jumper on the high address bit, and have the human switch it. When the jumper is closed A10 is tied to ground (logic 0), and when the jumper is open the pull-up resistor pulls it to 5v (logic 1). When reading/writing the EEPROM, the software on the PC side acts on the first half of the address space, then asks the human to switch the high address bit, and then acts on the second half.

If you wanted it to be a bit more convenient you could use a switch instead of a jumper.

You can get the Arduino program, and the dump-eeprom and burn-eeprom programs on my SCAMP github project.

Currently it only supports reading or writing 1 byte at a time, but since I ~always want to read/write the entire EEPROM, it would probably be worth adding a way to batch up 1024 bytes at a time in between toggling the serial port on and off, just to speed things up. The Arduino only has 2048 bytes of RAM, but I'm not using half of it yet, so I am pretty sure a 1024-byte buffer would be fine. If not, even a 512 or 256 byte buffer would be an improvement over just 1 byte at a time.